Blue is the colour of hope in Kashmir 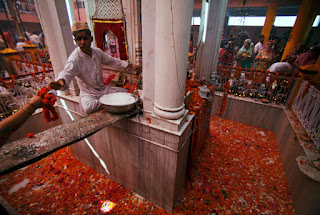 If the colour of the holy spring at Kheer Bhawani at Tul Mul village in Kashmir’s Ganderbal district is good evidence, Kashmir may be on the cusp of a new beginning.
As thousands of devotees gathered at the annual mela of Kheer Bhawani, Kashmir’s largest Hindu festival (a gazetted holiday in the valley), the gentle interdependence and mutual respect that Pandits and Muslims have enjoyed for centuries was also on display.
The Pandits’ principal deities have mostly natural forms. Sharika is the holy hill at Hari Parbat adjoining the great fort that Akbar built, while Ragya is the spring at Tul Mul. And on Tuesday — under the bed of rose petals showered by the pilgrims — the water was a gentle aquamarine blue: the colour of hope and with the promise of a better future. My mother remembers the spring as dark purplish and then almost black in the troubled Nineties.
Yearning for reconciliation intense in Kashmir
As thousands of Pandits and other devotees prayed at the holy spring at Kheer Bhawani at Tul Mul village in Kashmir’s Ganderbal district, there were Muslims too.
All the shops that sell the puja samagri — including the kands (sugar lumps), diyas, and agarbati — are run by Muslims. There were a range of stalls and service centres to help the devotees and provide free kehwa, luchi (a flat Kashmiri deep fried roti) and even lunch.
But perhaps the most striking was one run by Sameer Kaul and Suhail Ahmed. A Pandit and a Muslim, one teaching Computer Science and the other Management, both teachers of the Islamia College of Commerce, have been serving the “community” for more than the last decade. Their bond was one of a shared past that could lead to a new future.
I asked an elderly Muslim gentleman from downtown Srinagar why he was there. He said that he had been coming to Tul Mul for 40 years and added, with the proverbial Kashmiri sarcasm: Azkal cha Gaunah?” (Why, have they made it crime?).
Strictly vegetarian deity
Ragya is one of the few Pandit deities who is strictly vegetarian and who will not forgive those who enter her portals after a non-vegetarian meal.
In contrast, the prasad at Sharika is yellow rice with hot mutton liver curry and the priest even offers a sheep’s lungs to kites on the hill. But in deference to Ragya, every Muslim I met said that he would never enter the shrine’s compound after eating mutton, fish or fowl nor would anyone from the neighbourhood.


It was evident from the gathering at Kheer Bhawani that the yearning for reconciliation is intense on both sides and this year could be a game changer. Perhaps that is what the colour at the holy spring was telling us.
(Source: The Hindu, 27 May 2015)
Posted by Amitabh Mattoo at 4:52 AM