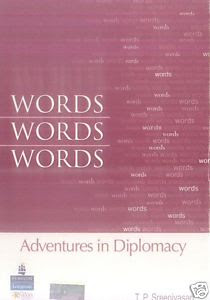 The term ‘candid and honest diplomat’ appears to be an oxymoron. After all, diplomacy is the art of being discreet and lying for your country. Post-retirement, however, many diplomats suddenly seem to turn cathartic, finally giving vent to long-suppressed opinions.

Diplomatic memoirs the world over often border on the scandalous. This, however, is not the case with Ambassador Sreenivasan and Words Words Words: Adventures in Diplomacy.

Sreenivasan appears to have been a gentleman diplomat, a rare breed. And this is a gentleman’s book.

No major scandals, no great revelations, but an interesting read nonetheless. The initial pages are devoted to encapsulating the author’s life, from his childhood in Kayamkulam in Kerala to his retirement as India’s ambassador to the IAEA in Vienna.

The rest of the book deals with the challenges Sreenivasan faced during his career. As he points out: “Two military coups, two expulsions and two broken limbs in an armed attack are not the stuff that diplomatic dreams are made of.

But there was abundant recompense for them in the 37 years in the IFS. I walked in and out of the White House and the Kremlin, worked in the United Nations, broke bread with the high and the mighty, encountered celebrities, presented credentials to more than 10 heads of state and spoke for a billion people for India on a variety of issues.”

The chapter “Nuclear Winter, Kargil Spring”, which deals with Indo-US relations in the wake of the 1998 nuclear tests, is insightful.

The author played a significant role in mending relations with the US Congress. One wishes, however, that Sreenivasan was more expansive with his “insider” knowledge on men and matters.

Posted by Amitabh Mattoo at 11:59 AM No comments: