Building block of a new phase in bilateral ties? 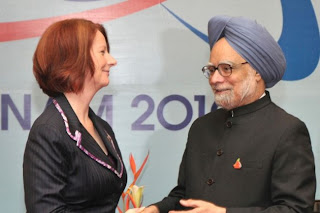 Australian Prime Minister Julia Gillard’s recent announcement of support for the sale of uranium to India could well be a catalyst for a strategic breakthrough in relations between Canberra and New Delhi. Indeed, while the “uranium decision” may not have a great impact on India’s energy needs, it could have far-reaching consequences for security and strategic stability in the Asia-Pacific region.

While the proposal to export uranium will need to be endorsed at the Australian Labor Party national convention next month, its passage appears to be a mere formality, despite expected opposition from the party’s left wing and autonomous bodies like the Australian Conservation Foundation. With the sale in force, Australia would become the sixth country in the world, following Russia, Mongolia, Kazakhstan, Argentina and Namibia, to enter into a formal uranium supply arrangement with India.

What does this new development portend for India’s energy security, especially its ambitious plan to ramp up domestic nuclear power production by more than an order of magnitude in barely two decades, and for the future of India-Australia relations? Nuclear power currently provides approximately four per cent of India’s generation mix, which is dominated by thermal and hydroelectric power, which collectively contribute 90 per cent of the total. India has approximately one per cent of the world’s economically viable reserves of uranium (Australia correspondingly has 40 per cent). Under such circumstances, a sale of uranium to India would make eminent economic sense, were it not for the complexities associated with the downstream uses of uranium.

For India, the immediate benefit of enhanced uranium supplies from Australia would be the supply of high-grade uranium requiring little remediation before use in nuclear reactors. Bilateral trade between the two countries will witness no significant qualitative change. The current trade balance is strongly tilted in Australia’s favour, with coal and gold being the dominant constituents of the export basket to India. All other things remaining the same, the trade difference will only increase in Australia’s favour and is unlikely to change unless value-added products constitute a larger share of India’s exports. All in all, the techno-economic implications for India of uranium supplies from Australia are limited. In addition, the stringent safeguards that Canberra is likely to demand, as part of a bilateral agreement, may invite a political and scientific backlash in India, and New Delhi will — in all likelihood — proceed cautiously.

Does Australia’s decision to sell uranium to India despite the latter’s insistence on not signing the Non-Proliferation Treaty have implications for bilateral ties and the evolving security apparatus in the Asia-Pacific? It needs to be recognised that there are historical moments in every relationship. Decisions taken at those moments can potentially transform a friendship, take it to an unprecedented new level of understanding, and in the process create the momentum for a new phase of deep strategic engagement. The Australia-India relationship has reached just such a moment of renewal and rediscovery.

As yet, despite a growing convergence of values and interests, and having two very competent High Commissioners in place, there is still little real conversation happening between key players in Australia and their counterparts in India. New Delhi and Canberra may know each other, but they still do not have a nuanced understanding of the other. Thus, in the absence of a sustained engagement at multiple levels of opinion and decision makers, even a single issue can derail bilateral ties, as was witnessed during the attacks on Indian students. This needs to change if the two countries have to work with each other in their own mutual interest, and in the interests of the wider region.

Take the case of India. At the official level, there are no more than one or two officers in the severely short-staffed ministry of external affairs who pay attention to Australia, and rarely for more than a couple of hours a week. It requires great persistence for Australian officials and diplomats to secure high-level attention from India, and this lack of real communication even at the government-to-government level does undermine the political relationship.

In Australia, while the problems are different, they are equally debilitating for the relationship. On the one hand, there is undoubtedly a collective desire to see improved relations with India. On the other, Australia is excessively cautious about not offending China as it builds a relationship with India. For instance, Australia’s decision to disconnect from the quadrilateral dialogue with India, Japan and the United States, to assuage Beijing’s nervousness, was arguably short-sighted.

Moreover, the Australian understanding of India, with all its complexities, is severely limited. Till about three decades ago, Australia could claim to be one of the principle centres in the world for the study of India, in various disciplines, and some of the most exciting work on India came from Australian universities. The Subaltern school of scholars is just one example. Not any longer. The study of India in Australia today is in deep decline and little effort is being made to revive departments that had once flourished.

The reality today is that Australia and India have more in common with each other, than perhaps at any time in the past. There is also a greater need and urgency to work with each other. The economic relationship is rapidly growing and will continue to remain robust in the foreseeable future. Strategically, both countries need to work to develop stable and cooperative security architecture for the Asia-Pacific. Such an arrangement would necessarily include China, to ensure that its rise is not disruptive. What has been missing is a “strategic breakthrough”.

A decision by Canberra to sell uranium would symbolically convey to India Australia’s willingness to genuinely invest in the relationship. This could be the building block of a new phase in bilateral ties. More importantly, there needs to be far greater political and intellectual engagement between the two countries. While a new forum for business leaders has been announced, there also needs to be a platform for political leaders and opinion makers from both sides. The Australia-India relationship is an idea whose time has come; it would be a historical tragedy if the leadership of the two countries did not grab this opportunity.