A vision for Kashmir 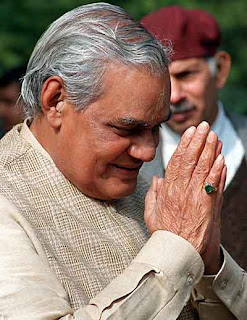 IN A little over a month from now, the first phase of polling will begin in Jammu and Kashmir. As of now, no political party in the State, other than the ruling National Conference, seems to be enthused by the elections. If this trend prevails, there is serious danger of a low voter turnout, and this would, whether we like it or not, erode the credibility of the polls. However, even at this late stage, it may be possible to create the conditions under which all those who do not participate in the electoral process will find themselves isolated from the bulk of the people in Kashmir.

But this requires the immediate articulation of a clear vision for Jammu and Kashmir by the top political leadership of this country. And the obvious choice is the Prime Minister on August 15, from the ramparts of the Red Fort.

The coming elections to the Assembly have, for better or for worse, acquired a special importance. The international community, especially but not only the United States, believes that elections could be a decisive step towards restoring peace in Jammu and Kashmir. Reports indicate that officials from both the U.S. and the European Union countries have been urging separatists to demonstrate their strength by participating in the elections. New Delhi has also signalled that it will not resume its dialogue with Islamabad until elections in Jammu and Kashmir are held in an atmosphere free of violence, suggesting thereby that an escalation of violence in the run-up to the elections would demonstrate bad faith on the part of Pakistan.

Moreover, there is some evidence that in the Kashmir Valley too, especially in the rural areas, there was, until a few weeks ago, a groundswell in favour of elections. And while it is almost certain that there will be no officially mandated international observers, there is no doubt that this is one election that will invite unprecedented media scrutiny. As one foreign journalist pointed out recently: "The Assembly election will invite at least as much attention as the Agra Summit last year."

And yet, the reality today is that the announcement of the polling schedule by the Election Commission has not generated much enthusiasm among the Opposition parties in the State.

Indeed, even many of the pro-India political parties have expressed strong reservations about the elections, while most of the separatists have already declared that they will not participate in the polls. Many Opposition leaders had hoped that a period of Governor's Rule would ensure that the electoral contest was not one-sided, but becomes a so-called "level playing field".

In addition, many moderate separatist leaders had been asserting that a dialogue, and the announcement of a few confidence-building measures by New Delhi before the announcement of the polls would make it easier for them to enter the electoral fray without losing credibility with the people. Conversely, if the Opposition parties, including the separatists, do not take part in the elections, the NC is likely to sweep the elections without much of a contest.

However, it is likely that, under these circumstances, the polling percentage will be very low and threaten to reduce the elections to a farce. Even the NC, under the untainted leadership of Omar Abdullah, is unlikely to be satisfied with such a result.

Is there a way out? Clearly, the polls cannot now be postponed and the decision on whether or not to have Governor's Rule during the electoral campaign is one that only the NC leadership can take. But it should be still possible, with political decisiveness and imagination, to stimulate public opinion in Jammu and Kashmir in favour of participation.

If this happens, all those who decide to stay away from the polls will risk political marginalisation and lose the chance of shaping the future of the State. But this cannot possibly be achieved by Track II dialogues, quasi-official committees or special envoys. What is needed is for the Prime Minister himself, on Independence Day, a month before the first phase of polling, to outline a non-partisan national vision for Jammu and Kashmir.

But in order for such a vision to really connect with the people of the State, it must be embedded in what are the six essential "Ds" of a thoughtful Kashmir policy: Democracy, Dialogue, Devolution, Development, De-internment and Disarmament. These need some elaboration.

First, the Prime Minister, Atal Behari Vajpayee, needs to reiterate that the Centre is committed to sustaining real democracy in Jammu and Kashmir, in letter and spirit. And not only will the coming elections be the first step towards that goal, with the world media being able to attest to their fairness, but this will be followed by steps to ensure that democracy is truly institutionalised up to the grassroots level. Second, Mr. Vajpayee needs to clearly indicate that the Centre will undertake a dialogue with elected representatives within the framework of insaniyatand that this dialogue will be unconditional and seek to address the cumulative grievances of the people of the State. Third, the Prime Minister must promise that the demand for devolution of powers of the State will be taken up with a seriousness that goes beyond the mere appointment of special envoys.

He must also signal that there is a growing realisation within the country that separatist tendencies grow when people feel disconnected from the structures of power; devolution, in turn, ensures greater participation and accountability and a greater stake in political normalcy and economic stability.

Fourth, the Prime Minister must offer the people of Jammu and Kashmir a new phase of development and reconstruction. In particular, he must address the approximately 200,000 unemployed educated young men and women of the State and he must pledge to create a host of new opportunities for them, including ensuring that the private and the public sector undertake special recruitment drives in the State. Fifth, Mr. Vajpayee should signal that all those from the State interned in jails, without trial for many years, will be released within days if they are not being held for any serious criminal offence. Finally, he must articulate a vision of a weapons-free Jammu and Kashmir if Pakistan stops sponsoring violence.

The Prime Minister must promise to ensure that the State returns to what it was: a non-violent society where even the sight of a gun would terrify the most hardened. Much of what is stated above is drawn from the statements Mr. Vajpayee has made on Kashmir over the past two years. But the various strands need to be brought together in a composite policy.

Indeed, if the Prime Minister does outline such a vision, it could electrify Jammu and Kashmir, and the results would be evident even beyond the coming elections.

Posted by Amitabh Mattoo at 9:30 AM No comments: