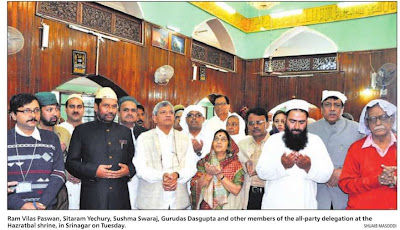 The visit of the all-party delegation to Jammu & Kashmir has generated hope and the expectation that it may still be possible to redeem the situation. The immediate task is now for New Delhi to move from the symbolic to the substantive, utilising the opportunity provided by the delegation’s visit. And as the central government reaches out to build trust and confidence, it is essential that this is matched by the people and their leaders in the state, in word and deed.

Even cynics will admit that the all-party delegation’s visit demonstrated the human and, arguably, the best face of Indian democracy. Nearly 40 seasoned leaders, representing virtually every ideological hue, stepped out from their routine programme to try and reach out to even those demonised by the Indian establishment.

In an ideal world, the exercise would have been more laissez-faire, but given the situation in the Valley, the political establishment performed, minor hiccups notwithstanding, with grace and imagination. Images of Sushma Swaraj praying at the Hazratbal shrine; Sitaram Yechury’s surprisingly chaste Hyderabadi Urdu chat with Ali Shah Geelani; P Chidambaram engaging the victims of the Tangmarg fire; Ram Vilas Paswan breaking down – all this represented a collage we should have witnessed at least two months ago, but it still made a difference! The visit has opened a window – albeit slightly – which was on the verge of being closed and bolted. Only an immediate initiative by New Delhi can ensure that goodwill generated by the visit will translate into real change on the ground. Acting now will not be seen as capitulating to street protests, but as demonstrating sensitivity and statesmanship.

Remember the one ordinary Kashmiri who confronted the home minister with a simple question: “If we are citizens of India, why are you spraying bullets on us?” And another who asked: “If you say Kashmir is atoot ang of India, then why are
you putting your own ang into the frying pan?”

The prime minister must, having obtained feedback from members of the delegation, act on a variety of fronts, including the humanitarian, the political and the social. As a humanitarian gesture, all those jailed over the last three months for stone-pelting must be released, as must political detainees against whom there is no charge of committing any heinous crime. It is critical, hence forth, that no civilian is killed by the police and the curfew is lifted. It is also critical to conduct a comprehensive analysis of the stakeholders (especially the youth) in each district of the Valley. Based on this, confidence- and trustbuilding measures that will have maximum impact must be implemented unilaterally.

The prime minister must also announce the formation of a Truth and Reconciliation Commission. Several commissions like this have been formed throughout the world; the best and most successful was established under the chairmanship of Archbishop Desmund Tutu in South Africa. A commission like this is not about fixing blame, but about accepting the tragic events of the past, bringing the past to a closure and moving together into a better future. It is about recognising the tragedy of two decades, of those who disappeared or who were killed, or the tragic displacement of Kashmiri Pandits. A commission like this can also be mandated to bring about a reconciliation between communities and regions; an accommodation between Kashmiri Pandits and Muslims as well as between the Valley, Jammu and Ladakh.

The prime minister must draw upon the delegation and create a team of political interlocutors. They will represent, symbolically, the collective voice of the nation. It is only the collective political leadership of the country that can genuinely reach out, engage and resolve the problems of Jammu & Kashmir. Restoration of peace in J&K and a roadmap should not be influenced by national vote-bank politics and the rest of India must be educated about the importance of building peace in Kashmir.

And if New Delhi continues to act in good faith, it is incumbent on the part of the people of the state, and especially the Valley, to respond meaningfully. While peaceful protests are part of the space that any democracy should offer its people, there is no scope for violence. The people of Kashmir have suffered and been traumatised over the lost decades and lived in uncertainty for the last six decades. Clarity of thinking is not easy in these times, but it is critical to move forward. It is time that the people and the leaders stop living under the illusion of a utopian dream. The reality is that the people must look for pragmatic ways to ensure the honour, dignity and the empowerment of the people in this globalised world. Running after the mirage of a distant paradise will only create conditions for greater suffering. And they must give dialogue and peace a chance.

There is an India beyond bunkers, security forces and corrupt politics; it is the vibrant India of entrepreneurs, professionals, civil society activists, the robust and free media, and the political delegation that visited the Valley. More and more Kashmiris must discover this India and build a coalition with it. That is the best guarantee against the other India which they witness in the Valley.

(Source: The Times of India)