It's Now or Never 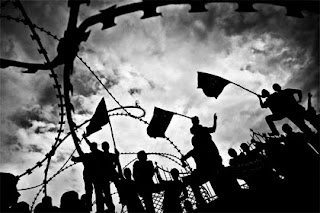 The grave crisis in Jammu and Kashmir demands a collective national response, and the all-party meeting today is a forum that must help devise a comprehensive consensual strategy for the state, even if anarchy seems to be the defining feature of the Valley’s polity at the moment. This can happen only if there is a minimum agreement on at least three issues.

First, it must be recognised that today almost the entire Valley has been overwhelmed by a collective expression of rage, led by the youth who were born or grew up during the years of militancy and who are driven by a sense of hopelessness. This is a product largely of our own follies, and our inability to translate the gains of the election in 2008, the most inclusive in J&K’s history, into long-term dividends, and these mistakes have been compounded over the past few months. Consider this: nearly 90 civilians have been killed since June and not one national leader — outside Prakash Karat of the CPI (M) — has thought it fit to visit the state. Under these circumstances, it would be too much to expect Pakistan, and other anti-India forces not to fish in these troubled waters.

But it’s equally important to realise that the pro-Pakistan constituency in the Valley, before the present troubles, had shrunk dramatically. After all, the political and social conditions in Pakistan had not gone unnoticed in the Valley. Second, the ‘fire’ in Kashmir can only be doused by a multi-track approach that targets and addresses the people of the state, not individual leaders or parties (separatist or mainstream). This approach should have only one goal: the political, social and cultural empowerment of the people and a real abiding assurance of security for every citizen. This can be achieved by a systematic, imaginative and continuously monitored plan of action devised in close coordination with the government by the leaders of the major political parties.

Third, it is essential that we accept that J&K is unique and must be dealt with specially. Its uniqueness is obvious for a variety of historical reasons recognised even by the Supreme Court. In 1984, in Khazan Chand vs the State of Jammu and Kashmir, the court unambiguously held that the state holds “a special place in the constitutional set up of the country”. Earlier, the 1983 Srinagar Declaration adopted by the Opposition conclave that included Jyoti Basu, I.K. Gujral, Chandra Shekhar and Parkash Singh Badal, stated that “the special constitutional status of J&K should be preserved and protected in letter and spirit”. More important, however, is Kashmir’s singular importance to the very idea of India, which is often forgotten. A Muslim majority state that voluntarily acceded to India in 1947 lent tremendous strength to the construction of India as a vibrant, secular and pluralistic State.

The battle, therefore, to win back the hearts and minds of the Kashmiris is critical not just for the strengthening of the ideals that inspired Indian nationhood, but is also central to the war against obscurantism and extremism. In other words, J&K must no longer be dealt with the kind of political ineptitude and bureaucratic inertia that has often characterised the Centre’s policies towards many other states. This requires the necessity of rising above partisan considerations. This fact is clearly understood by the UPA and the NDA leaderships.

If there is acceptance of the above, the all-party meeting must consider the following three-point plan of action. First, an all-party parliamentary delegation must visit the state at the earliest to carry an on-spot assessment of the situation and meet with as many ‘ordinary’ Kashmiris as possible as well as political leaders, in Srinagar and the countryside. Political leaders have an intuitive ability to a do a quick stakeholder analysis and they must be tasked with working out confidence- and trust-building measures that must be unilaterally implemented by New Delhi.

Second, a special task force must be immediately constituted by the prime minister and dedicated full-time to J&K (headed by a Cabinet minister or by the PM himself). It must be made responsible for monitoring, on a daily basis, the situation in the state, and assisting in governance and developmental activities and other pressing problems in the state and to reduce the ‘trust’ and ‘governance’ deficits.

Third, the all-party meeting must demand that UPA leadership and the government appoint a credible team of negotiators to conduct a political dialogue between the Centre and the people of the state. The dialogue should be as inclusive as possible, and no group or individual must be considered untouchable. No conditions must be attached at the beginning of a dialogue. It is quite obvious that any negotiations the Centre conducts can, in no way, compromise the unity and integrity of India. Even separatists realise this. But any explicit conditionalities make it difficult for many to take the initial leap from the streets to the negotiating table. The people of the state must be made to see that the genius of the Constitution is such that it can be made to accommodate the most robust aspirations of even the most disempowered or marginal group.

When the rest of the nation demonstrates its good faith towards the people of J&K, it should be possible to redeem the situation. The people of J&K, even at the worst of times, have almost always demonstrated reasonableness. They are naturally inclined to travel along the path that leads to peace, prosperity and people’s power. The time has come for our political representatives to remove all the hurdles on this path. Collectively, the Indian nation is indeed capable of achieving what might today seem an impossible task.