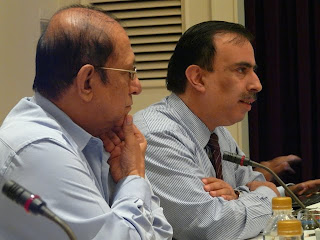 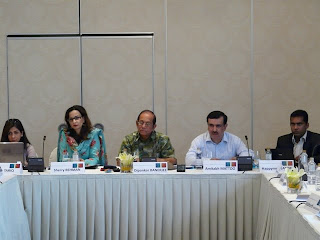 Leading opinion makers from and met at for the 5th round of the Chaophraya Dialogue from 28-30 August 2010. They began their deliberations by observing a minute of silence to commiserate with the victims of the recent floods in that have caused a grave humanitarian crisis in the country. The Indian participants collectively voiced their support for and solidarity with the people of at this challenging time. The Pakistani participants welcomed the offer of Indian humanitarian aid. All the participants hoped that this crisis will lead to greater cooperation between the two countries.

1. The participants emphasized the need for continued bilateral engagement especially at official and functional levels. They hoped that the dialogue can be sustained until there is a satisfactory resolution of all outstanding issues.

2. They welcomed the forthcoming meeting of the foreign ministers and expressed the hope that this would take the dialogue process forward.

3. The participants felt that the two sides need to agree upon the form and structure of the dialogue.

4. They noted that decisions already taken in earlier rounds of talks needed to be implemented fully. Other issues on which there is convergence must be brought to an early conclusion.

5. To facilitate people-to-people exchanges, the participants felt that there was a need to relax visa restrictions particularly for artistes, media, academics, business persons, students and civil society organizations.

6. To build trust and confidence, they recommended exchanges of visits by military delegations especially at the level of service chiefs, and similar exchanges between intelligence agencies.

7. The two governments should urgently take up the humanitarian issue of fishermen and other prisoners languishing in each others’ jails and find workable compassionate solutions.

1. The participants strongly supported a comprehensive process to build sustained peace and reconciliation between and .

2. They believed that a sustained dialogue between and , including on , was required to ensure lasting peace.

3. They recommended that and should facilitate a dialogue between representatives from all parts of , reflecting all shades of political opinion.

4. The participants suggested that to complement the bilateral dialogue, inter and intra-Jammu and Kashmir dialogue, and should consider activating the back-channel on .

5. They called upon and to implement, in letter and spirit, the series of existing CBMs, particularly those relating to easing travel and trade between the two sides of the Line of Control.

6. They also appealed to and to urgently initiate measures to build trust and confidence amongst the people of .

7. The participants believed that progress made on various tracks of the dialogue must be shared with the principal stakeholders within and , including the major political parties.

1. The participants recognized that instability in would have serious implications for both and . Hence it was important for both countries to support reconciliation in which was essential for stability in the country and the region.

2. They agreed that the future of should be the exclusive domain of the people of . It was recommended that all other countries refrain from interfering in the internal affairs of .

3. It was agreed that the only solution to the Afghan problem is a political one. There can be no military solution.

4. The participants felt that the aspirations of the Afghan people for stability and sovereignty should be fulfilled as early as possible within an Afghan-owned multi-ethnic and broad-based framework.

6. The participants further suggested that and should look for specific avenues of cooperation. It was noted that cooperation among , and has great potential. All three countries are members of SAARC, and should, therefore, be encouraged to consult one another on issues of mutual concern and economic development. The three countries should explore potential areas of cooperation which could include joint investment, energy cooperation, infrastructure development and trade, among others.

1. Participants agreed that terrorism was a common enemy and the comprehensive defeat of terrorism should guide the policies of the governments of and . , today, faces, an existential threat from terrorist organizations, while the memory of various terrorist attacks still affects public opinion in .

2. They recognized that terrorism was a common threat to both countries and must be dealt with vigorously in all its aspects.

3. They felt there was a need for institutionalized and regular interaction between the heads of the intelligence agencies outside public glare.

4. They recommended that those involved in prosecution of terrorist cases common to both countries should meet often to expedite disposal of cases.

5. Both sides must actively collaborate to facilitate the prosecution of terrorists being tried for acts of terrorism.

6. It was suggested that civil society organizations should build public awareness of their respective national commitments to combat terrorism under the relevant United Nations conventions and binding resolutions.

7. The participants also proposed that both countries must respect each other’s territorial integrity, sovereignty, and refrain from interference in each other’s internal affairs.

Posted by Amitabh Mattoo at 9:25 AM