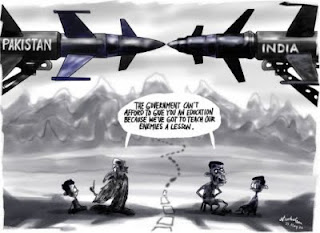 As finance minister of India, Manmohan Singh led the process of economic reforms, which liberated India from the autarchy that had caged it to the Hindu rate of growth. In his first term as Prime Minister, Singh risked the survival of his government by agreeing to a nuclear deal with the US. By freeing the country from the regime of technology-related sanctions, India also mainstreamed itself as a nuclear power. It is now clear that the Prime Minister intends to use his current term in office to free India from the heavy burden of its 60-odd-year-old belligerent relationship with Pakistan. In this view, India-Pakistan reconciliation alone will ensure durable peace in Jammu and Kashmir, and will truly heal communal relations in the sub-continent.

All those who believed that the political backlash after the India-Pakistan joint communiqué at Sharm-el-Sheikh would deter the Prime Minister, clearly failed to recognise the grit and determination of Manmohan Singh. His visit to the valley has demonstrated convincingly that no matter how heavy the odds, New Delhi will move proactively to engage Pakistan, while ensuring that the aspirations of the people of J&K are fulfilled.

What is the logic behind this policy? Clearly, the Prime Minister believes that Pakistan hangs like a millstone around India. A disproportionate portion of its military and diplomatic resources have been absorbed in the enmity with Pakistan. Moreover, will India really be taken seriously as a great power if it is not even capable of settling its own backyard? Reconciliation with Pakistan, therefore, would enable India to play, with much greater robustness and strength, its rightful role in international relations. But for lasting peace with Pakistan, it is also vital to arrive at a settlement in J&K.

This view is not born out of naivety. It has been clear for some years now that India is unable to fully comprehend or address the complexities of a changing Pakistan. Not surprisingly, New Delhi’s policies have floundered, if not failed. Strident debates in the Indian media—frightening in their Manichaean simplicity—reflect a lack of appreciation of the intricacies of the Gordian knot of bilateral relations.

Unlike much of the establishment, however, Prime Minister Manmohan Singh—by pinning Pakistan Prime Minister Yusuf Raza Gilani to a joint statement at Sharm-el-Sheikh and then by warning the chief ministers of Indian states of the dangers of a terrorist attack from Pakistan-based groups, and by reaching out to the people of Pakistan from the Kashmir valley—may have addressed part of the core problem: there are multiple Pakistans all of which demand Indian attention. Robust if differentiated, focused but flexible, multi-track responses need to define India’s policy towards Pakistan’s fragile and fragmented political and social structure.

At a time when it has become risky to invoke Mohammad Ali Jinnah, it is still important to recall his original design for the state: Muslim, moderate and modern. It is this Pakistan that an Indian strategy must work towards constructing. And this must combine at least three elements. First, India needs to build strong defensive and offensive capabilities to deter ‘asymmetric’ attacks by non-state actors, which may have the backing of elements of the Pakistani establishment. Nuclear weapons, at the end of the day, will only deter nuclear weapons and, at best, a full-scale conventional war.

Secondly, India must reach out and strengthen all those who have a stake in better India-Pakistan relations and an interest in regional stability through unilateral gestures that do not demand reciprocity. These would include specific initiatives for civil society actors, as well as many others within the business and political community. The Prime Minister made this vital distinction in Kashmir between the people of Pakistan and the state of Pakistan.

Thirdly, India must systematically seek to weaken, delegitimise and isolate those who are enemies of a moderate Pakistan and, by implication, of a stable subcontinent. This can be done unilaterally or in conjunction with allies. It is unfortunate that sub-continental Islam, built on an ethos of multiculturalism and tolerance, has not been projected with the robustness needed in these difficult times. This ‘soft power’ of South Asian Sufi Islam remains the best weapon against extremism.

While seeking to help stabilise Pakistan, the process of building peace in J&K must clearly continue with speed. This is only possible through a dialogue with all stakeholders in the state, including separatists, and by resuming the back channel on Kashmir.

The challenge through these dialogues is to arrive at a consensus on devolution and decentralisation of power. An important working group of the Prime Minister on J&K dealt with Centre-state relations, but it was unable to arrive at a breakthrough. This does not, however, mean that we have arrived at a cul de sac. There are many proposals on the table, including those on autonomy, self-rule, self- governance and achievable nationhood. A sincerity of purpose, together with an imaginative and creative play with many of these ideas, should make it possible to arrive at an agreement amongst the main stakeholders in Jammu, Kashmir and Ladakh on the quantum of political space needed, at every administrative level, for true empowerment of all the people of the state, as well as on the institutions and mechanisms needed to support this architecture.

These internal discussions must flow into the back-channel, which can then attempt to work out a non-territorial India-Pakistan settlement on J&K—based on providing a similar political architecture on both sides of the Line of Control, while working towards converting the LoC into a line of peace that allows for the free movement of people, goods, services and ideas. Cooperation in areas of mutual interest like water, transport, agriculture and education will require the gradual creation of trans-LoC mechanisms and institutions. The implementation of such an understanding should create the conditions for a win-win solution, without needing to address hard issues of political sovereignty. This seems to be the template of the Prime Minister’s policy. With determination, and a little luck, he may just succeed where others have failed.