Lost in the valley 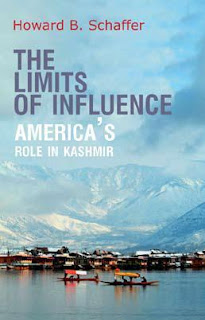 THE LIMITS OF INFLUENCE: AMERICA'S ROLE IN KASHMIR, Howard B. Schaffer, Penguin/Viking

Almost everyone who has the slightest interest in American policy towards South Asia knows of Ambassadors Howard and Terisita Schaffer. Between them, this Washington-based power couple, have more than 50 years of diplomatic experience in dealing with South Asia. And both "Howie" and "Tazy" have a special interest in Kashmir; an interest which was nurtured, in the post-diplomatic years, as leading members of the Kashmir Study Group (KSG), sponsored by a New York-based expatriate Kashmiri businessman. The KSG recommended that Kashmir be reconstituted as a "sovereign" entity but without an international personality, which expectedly made New Delhi a little wary of the group's activities. The Schaffers combine old world charm with incisive analytical skills, and The Limits of Influence is a book that only Howard B. Schaffer could have written. It blends personal insight with declassified archival material and a passionate conviction that the US has a role in resolving the conflict, to produce an impressive narrative of American interests and policies towards Kashmir.

Remember that the US did have a deep interest in the future of Kashmir during the Cold War. In the 1950s, suspicion about American policy on Kashmir had reached such a level that in 1953, Sheikh Abdullah was dismissed. This, after he had a couple of luncheon meetings in Srinagar with Democratic Party leader Adlai Stevenson, who was touring Kashmir, and private discussions with American Ambassador Loy Henderson, where the option of independence was apparently mooted.

Suspicions about official American thinking on Kashmir were resuscitated in the early '90s, after the end of the Cold War. This time, however, there were no great strategic interests at stake. It was, however, the bleeding-heart liberals of the new Clinton administration who-it seemed-were deeply disturbed by the new troubles in Kashmir. What made things worse was the presence of Robin Raphel-the first-ever assistant secretary of state for South Asia-in the first Clinton administration.

At one of her first off-the-record briefings as assistant secretary, Raphel set the Ganges on fire by stating that the official position of the US was that "the accession of Kashmir to India was disputed". India's suspicions seemed to be confirmed: the liberal trail for an independent Kashmir ran from Adlai Stevenson to Robin Raphel.

What, then, is the position today? Clearly, the surest way to diminish American leverage is through explicit involvement on Kashmir, given Indian suspicions. The most prudent way is for Obama to continue exercising pressure on Islamabad to clamp down on the terrorists and extremists, and then gently nudge India to resume bilateral talks. Once New Delhi is persuaded of Islamabad's real intent to end terrorism as an instrument of policy, the back channel on Kashmir can be resumed. The understanding between Pervez Musharraf and Manmohan Singh can then become the basis of a real win-win solution in Kashmir. Fortunately, Obama is a pragmatic realist, and has little time for either the Adlais or the Robins of the Democratic party. This, of course, is a point on which Schaffer would strongly disagree.