Four D's For A New Kashmir 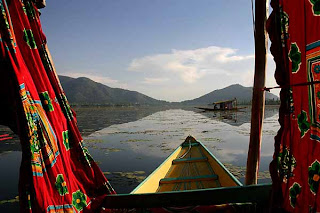 The prime minister's visit to Jammu & Kashmir provides a unique opportunity for New Delhi to build on the vision of Naya Kashmir outlined Manmohan Singh during his earlier tenure. Kashmir is the ground zero of the India-Pakistan relationship. A signal from Singh on India's willingness to engage its troubled neighbour - in spite of its recalcitrance would generate tremendous enthusiasm within Kashmir. The Kashmiri people know through their own traumatic experience how essential India-Pakistan reconciliation is to ensure durable peace in the state.

For all Kashmir's apparently complex problems, there are in reality only four principal challenges that need to be addressed. First is the issue of the three dialogues that are vital to rebuild the culture of mutual respect, tolerance, accommodation and faith in peaceful conflict resolution. Last winter, we witnessed one of the most inclusive elections in the state's history. Yet only the myopic will suggest that popular alienation has ended or separatist sentiment is dead. The challenge is to ensure a larger dialogue with separatists and even former militant groups which need not delegitimise the elections or undermine elected representatives.

This should not be difficult to engineer if there is clear political will and the task of interlocuting is not left to intelligence operatives or retired babus. Dialogue must be unconditional and continuous and should address both political and humanitarian issues that could build confidence and trust (including the issue, for example, of the release of political detainees and ensuring a stricter enforcement of human rights).

Internally, it is also vital to build, through talks, a process of reconciliation between Ladakh, Kashmir and Jammu and the sub-regions. There has been growing regional and communal polarisation, which needs to be urgently addressed. The dialogue within should be complemented by restarting the New Delhi-Islamabad backchannel on Kashmir, to ensure that Pakistan has no incentive to subvert the internal track. This should, of course, take off from precisely where previously designated special envoys had paused in their discussions.

The second challenge is to arrive at a consensus on devolution and decentralisation of power. An important working group of the prime minister on J&K dealt with Centre-state relations, but it was unable to arrive at a breakthrough. This does not mean that we have arrived at a cul-de-sac. There are many proposals on the table, including those on autonomy, self-rule, self-governance and achievable nationhood. Sincerity of purpose, together with a creative play with many of these ideas, should make it possible to arrive at an agreement amongst the main stakeholders in Jammu, Kashmir and Ladakh on the quantum of political space needed, at every administrative level, for true empowerment of all the people of the state, and on the institutions and mechanisms needed to support this architecture.

These internal discussions must flow into the backchannel, which can then attempt to work out a non-territorial India-Pakistan settlement on J&K based on providing a similar political architecture on both sides of the Line of Control while working towards converting the LoC into a line of peace that allows free movement of people, goods, services and ideas. Cooperation in areas of mutual interest like water, transport, agriculture and education will require the creation gradually of trans-LoC mechanisms and institutions. Implementation of such an understanding should create conditions for a win-win solution without needing to address hard issues of political sovereignty.

An issue that is both controversial and essential to building peace is demilitarisation. Militarisation must not be confused merely with withdrawal of troops. It is a culture that legitimises use of violence and force, rewards machismo and physical aggressiveness, patronises intolerance and repression and is contemptuous of marginal groups. No one actor can be held responsible for J&K's militarisation, particularly over the last two decades, and no one action will change this reality. In many ways, militarisation is, to use Ashis Nandy's classic phrase, an "intimate enemy". All stakeholders, state and non-state, have an obligation to recreate a demilitarised culture of peace. What is required is deep introspection, a changed mindset and, of course, a change of heart and policy. A truth commission would be an ideal starting point. Symbolically, the withdrawal of troops from the main cities will send an immediate signal of the government of India's sincerity of purpose. But much will also depend on Pakistan's actions in ending sponsorship of violence as well as the ability of Kashmiris themselves to resist attempts that legitimise violence and force them to abandon once again their distinctly non-violent historic identity.

Finally, of course, is J&K's development, a central part of the prime minister's vision for the state. Other than improved connectivity and infrastructure, it is essential to give J&K's youth a greater stake in the country's booming knowledge economy. Given the geography of the state, and its growing endowment of skills, electronic exports of services may play a more significant role in its beneficial economic integration than the export of apples and handicrafts.

Posted by Amitabh Mattoo at 1:41 AM