The new axis of evil 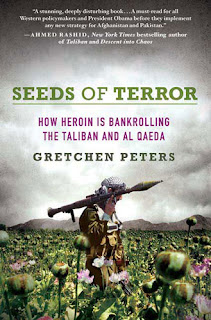 SEEDS OF TERROR, How Heroin is Bankrolling the Taliban and Al-Qaeda, Gretchen Peters, Thomas Dunne Books

A shepherd from Afghanistan's Nimroz province, Haji Juma Khan or HJK, it is believed, had 200 houses in Pakistan and Afghanistan and "palatial residences" in four other countries. Even by the most extravagant of lifestyles, HJK was a rarity. Three wives, scores of girlfriends, a lover of music and dancing and a connoisseur of "alcohol-drenched parties hosted by Russian and Turkish prostitutes", and a keeper of the "most handsome boys", HJK's citadel in Zaranj (the otherwise barren capital of Nimroz), guarded by dozens of armed men, "dwarfed even the provincial governor's mansion across the street".

HJK was the "kingpin" of the Afghan drug empire, trading as much as $1 billion a year in opium and heroin. Similar in his excesses to Pablo Escobar, "the Colombian kingpin who packed jetliners with cocaine and maintained a private zoo", HJK was different in at least one respect: he was the principal source of funding, for several years, of the vanguard of the Islamic jihad. These included the most puritanical and fundamentalist Islamic movement led by the Taliban, the most deadly global terrorist organisation, the al Qaeda, and the ruthless Islamic Movement of Uzbekistan (IMU).

According to General Ali Shah Pakitiwal, a senior Afghan police official, "Juma Khan's forces are terrorists. He pays them to protect his drugs. Mullah Omar, Tahir Yuldeshev, Osama bin Laden. They all work for him." Omar is, of course, the one-eyed supreme leader of the Taliban, Yuldeshev is the "radical mullah" who founded the IMU with Juma Namangani ("a former Soviet paratrooper in Afghanistan who defected to the Mujahideen") and Osama is, well, Osama. And all of them have, over periods of time, been linked to and been supported by the Inter-Services Intelligence (ISI) Directorate of Pakistan. It is in establishing this "new toxic mix of jihad and dope" (to use the words of journalist David Kaplan), with hard evidence and credibility, that Gretchen Peters' frightening and fascinating story counts for more than reports emerging out of interior ministries the world over.

Journalists, some self-indulgent hack once said, produce the first draft of history. In reality, most reporters write books that have the life of an untreated wooden shelf ridden with termites. Peters, an ABC News reporter, in contrast, has produced a painstaking account that blends brilliant investigative reportage with serious research. Seeds of Terror is not a perfect book, the prose could have been crisper; the references clutter the main arguments; but this is a book that will be read and re-read as much by concerned citizens as by spooks in intelligence agencies, even as it sends chills down our spine and we fear, as did Peters, for the future our children will inherit.

Unearthing this "axis of evil" between drug traffickers, terrorists, and powerful elements within the establishments in Pakistan, Afghanistan and the Gulf that backs them, demystifies as much the so-called jihad in Afghanistan, but it is an equally strong indictment of American follies in Afghanistan. While in the early years of the Mujahideen resistance against the Soviet Union, the Americans just didn't care about narcotics in Afghanistan, the Bush administration recognised the need to end drug trafficking only much much after 9/11. But "instead of intensifying efforts to go after the traffickers and money-launderers behind the insurgency, the Bush administration pushed for a broad scale aerial spraying of poppy fields". Unfortunately this played "into the hands of traffickers and terrorists", as it drastically increased the prices of opium and increased profits for the drug dealers and the Taliban.

Indian readers will have a special interest in particularly one section of the book. It was in a Dubai cafÃ©, "drinking cappuccinos" with one Riaz that Peters learnt, "how the boss of South Asia's underworld launders millions of dollars in Afghan drug money". This "undisputed crime lord" is Dawood Ibrahim, and Riaz laundered money for him for over a decade. Dawood, wanted in India for the 1993 Mumbai blasts and accused in narcotics smuggling, has the dubious distinction of being the only person Washington has designated both a "global Terrorist Supporter" and a "Foreign Narcotics kingpin".

After the 1993 blasts, he took refuge in Karachi "reportedly under the protection of the ISI". It was then that the D-company began working in the region's opium trade. Dawood travelled to Afghanistan "under the protection of the Taliban" and brokered a "financial arrangement to share smuggling routes with bin Laden". A former senior CIA official told Peters, "If you want to understand what Osama bin Laden is up to, you have to understand what Dawood Ibrahim is up to."

According to Riaz, all that the D-company does now is "launder drug money" through front companies established in the UAE. For less than $20,000, Riaz could set up a totally fabricated company which would move millions of dollars into the UAE every year. These earnings would then be pumped into the stock market, where they come out clean. Another place to launder money was probably the Karachi Stock Exchange (KSE). For instance, in 2006, "$120 billion was pumped through the KSE, a year when the country's economy totalled only about $130 billion" and Dawood is believed to be "spending most of his time behind the high walls of a Karachi mansion", probably monitoring the KSE.

As Peters concludes, "Eight years after 9/11, the greatest single failure in the war on terror" is not that bin Laden is at large or that the Taliban may come back to power or "that the al Qaeda is regrouping in Pakistan's tribal areas and probably planning fresh attacks on the West, it is the spectacular incapacity of Western law enforcement to disrupt the flow that is keeping their networks afloat". Remember it cost al Qaeda only $500, 000 to finance 9/11. These days, terrorist groups, as Peters reveals in her extraordinary book, earn that from dope in about a week.