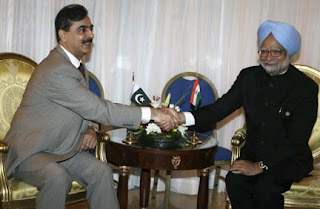 It has been clear for some years now that India is unable to fully comprehend or address the complexities of a changing Pakistan. Not surprisingly, New Delhi’s policies have floundered, if not failed. Strident debates in the Indian media — frightening in their Manichaean simplicity — reflect a lack of appreciation of the intricacies of the Gordian knot of bilateral relations. Unlike much of the establishment, however, Prime Minister Manmohan Singh — by pinning Pakistan Prime Minister Yusuf Raza Gilani to a joint statement at Sharm-el-Sheikh and then by warning the Chief Ministers of Indian states of the dangers of a terrorist attack from Pakistan-based groups — may have addressed part of the core problem: there are multiple Pakistans all of which demand Indian attention. Robust if differentiated, focussed but flexible, multitrack responses must now define India’s policy towards Pakistan’s fragile and fragmented political and social structure.

Not only the deep cleavages within Pakistan’s society but also — surprisingly — the overwhelming popular desire now for better relations with India are revealed in two recent surveys of public opinion in that country, conducted by Gallup Pakistan and by the Pew Research Centre’s Global Attitudes Project which included 24 countries (including Pakistan) and the Palestinian territories. The findings should also serve as a warning to New Delhi of the dangers of “outsourcing” its Pakistan policy to Washington.

Three findings from both surveys stand out. First, as expected, is the high level of anti-Americanism among the Pakistanis. In the Pew survey, 68 per cent of the respondents have expressed a negative opinion of the U.S. Only 16 per cent have a positive view, and 64 per cent consider the U.S. more an enemy than a friend. American President Barack Obama receives the lowest ratings in Pakistan among all 25 nations surveyed as part of the Pew project. The Gallup Poll too reveals the all pervasive nature of Pakistani sentiment against the U.S. Fifty-nine per cent consider the U.S. the greatest threat to the country. Not surprisingly, American policy in Afghanistan receives very little support.

Secondly, both surveys suggest that there is a strong public desire for better relations with India even among those sections which consider their eastern neighbour a major threat. The Gallup Survey suggests that only 18 per cent consider India the greatest threat, and interestingly the figure is the highest among those likely to vote for either the MQM or the ANP and lowest among Sindhi speakers. Women are more likely to be anti-American than anti-India. According to the Pew survey, 69 per cent of the respondents do consider India a major threat, but two-thirds believe it is important for relations between Islamabad and New Delhi to improve. Over a third of those polled believe that having good relations with India is very important. Apprehensions about India are the highest in Punjab, where 70 per cent cite India as the greatest threat to the country, while a majority in Sindh and the NWFP consider the Taliban a bigger threat.

Finally, it seems that there is a process of deep churning within Pakistan’s multiple “societies,” which seems to translate, at the moment, into almost schizophrenic responses on key issues of identity. This is most clearly reflected in attitudes towards the al-Qaeda, the Taliban, and “severe laws” associated with these groups. For instance, in the Pew survey, there is little support for the Taliban and the al-Qaeda. Fifty-seven per cent consider the Taliban and 41 per cent consider the al-Qaeda a serious threat to the country. Forty one per cent in the Gallup poll support military action against the Taliban. And yet there is also considerable support for the harsh punishments imposed by these extremist groups. Seventy-eight per cent favour death for those who leave Islam; 80 per cent support whipping and cutting hands for theft and robbery; and 83 per cent favour stoning adulterers. And yet, 87 per cent of Pakistanis believe that it is equally important for boys and girls to be educated, in contrast to the Taliban’s thinking. The poll finds that support for suicide bombing remains very low. In terms of credibility of institutions, the army, the media and the judiciary receive high approval while the Inter-Services Intelligence, the police and the national government get much less support.

These findings need to be studied carefully but if they are indeed reflective of real trends, they suggest what has always been intuitively obvious: India’s Pakistan policy has not succeeded because, while remaining a prisoner of past dogmas, it has been unable to respond to the multiple political and social forces in Pakistan that need to be understood and addressed.

The strategic community in India has traditionally been overwhelmingly in support of a policy of aggressively countering Pakistan. These are the Subedars. Only a minority, the Saudagars, has wanted to ignore and benignly neglect Islamabad or integrate it economically. A microscopic few, however, want New Delhi to be proactive in promoting peace, even to the extent of making unilateral concessions. These are the Sufis.

But these strands cannot afford today to remain in opposition to one another. The need of the hour is for the Subedars, the Saudagars and the Sufis to come together and shape a new Pakistan policy. At a time when it has become risky to invoke Mohammad Ali Jinnah, it is still important to recall his original design for the state: Muslim, Moderate and Modern. It is this Pakistan that an Indian strategy must systematically work towards constructing. In the present scenario, Indian policy must have at least the following strands.

First, India needs to build strong defensive and offensive capabilities to deter “asymmetric” attacks by non-state actors which may have the backing of elements of the Pakistani establishment. Nuclear weapons, at the end of the day, will only deter nuclear weapons and, at best, a full-scale conventional war. Doctrines like Cold Start will, however, remain in cold storage until they are able to explicitly demonstrate that diplomatic, political and military benefits outweigh the costs.

Secondly, India must reach out and strengthen all those who have a stake in better India-Pakistan relations and an interest in regional stability through unilateral gestures that do not demand reciprocity. These would include specific initiatives for civil society actors, as well as many others within the business and political community. For instance, New Delhi should consider constructing a preferential trading regime that offers Pakistan’s handicrafts and other local products almost unfettered access to the Indian market. Such a gesture, with some short-term costs, could have far-reaching long-term benefits for India and the region. Similarly, New Delhi could begin by offering a thousand scholarships to young men and women in Pakistan willing to study the humanities or social sciences in India at the undergraduate and postgraduate levels.

Thirdly, India must systematically seek to weaken, delegitimise and isolate those who are enemies of a moderate Pakistan and, by implication, of a stable subcontinent. This can be done unilaterally or in conjunction with allies. It is unfortunate that sub-continental Islam, built on an ethos of multiculturalism and tolerance, has not been projected with the robustness needed in these difficult times. This “soft power” of South Asian Sufi Islam remains the best weapon against extremism.

Fourthly, Indian policies must be carefully distanced from the present American role in Pakistan or the larger U.S. Af-Pak policy. In the Pew survey, more Pakistanis expressed a willingness to trust Osama bin Laden rather than Mr. Obama to do the right thing in world affairs. Ultimately, we need to understand that India-Pakistan relationship, over the last 62 years, has been about almost everything that matters: history, memory, prejudice, identity, religion, sovereignty, ideology, insecurity, betrayal and much, much more. Ironically, a troubled Pakistan, confused about its identity and its place in the world, may offer a real chance to move beyond conflict and towards real reconciliation. It is an opportunity to finally cut the Gordian knot; a chance India cannot afford to miss.

Posted by Amitabh Mattoo at 9:07 AM