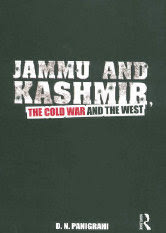 JAMMU AND KASHMIR, THE COLD WAR AND THE WEST: D.N. Panigrahi; Routledge

In the 62 years of the Kashmir conflict, there have been only two outstanding diplomatic histories — broadly sympathetic to Indian interests — dissecting the international game that was played out in the early years of the dispute. The first, Kashmir: A Study in India-Pakistan Relations, was produced by Sisir Gupta in 1966. A scholar-turned-diplomat, he trained generations of future South Asia scholars — including the doyen of South Asian studies in the US, Stephen Cohen — even as he analysed the minutiae of the Kashmir “problem” from the research confines of Delhi’s Sapru House. In 2002, Chandrashekhar Dasgupta, an outstanding diplomat turned scholar and produced War and Diplomacy in Kashmir, 1947-48.

Gupta demonstrated the legal and moral strength of India’s position on Kashmir. Dasgupta, benefitting from the declassified papers at the India Office Library in London, made a convincing case that it was British intrigue rather than Nehruvian idealism that was responsible for many of the so-called Indian follies in the first years of the conflict over Kashmir. D.N. Panigrahi joins Gupta and Dasgupta in the shrinking Indian galaxy of diplomatic historians. Jammu and Kashmir, the Cold War and the West is an invaluable contribution to the literature on the international politics of Kashmir. Strongly sensitive to India’s position, this, however, is neither propaganda nor a polemical diatribe. It is a first-rate scholarly account that will have shelf life even beyond the conflict.

He has accessed the papers of Clement Atlee, Winston Churchill and almost all the British dramatis personae who played a role in the Kashmir conflict. Like Dasgupta, Panigrahi provides compelling evidence to reveal the nature of British interests and intrigue, which translated into a strong bias for Pakistan. And not for just geo-political reasons, but even cultural ones. Take two examples. Atlee categorically stated that Kashmir was an issue so germane to the Muslim world that the British must support Pakistan keeping in view the British interest in the Middle East. Lester Pearson, the foreign minister of Canada, while trying to disinter the reasons for the British preference revealed that the “British with a few exceptions, will tell you that the ‘Paks are better people, more our type, you know’” while Indians can be “unreasonable”, “self-righteous” and “morbidly sensitive about their independent position”. The third section of the book, Indo-Pak dialogue on Kashmir, is essential reading for all those in the “corridors of powers” seeking to find a settlement on Kashmir even though it relies excessively on the diplomat Y.D. Gundevia’s equally brilliant Outside the Archives (1984).