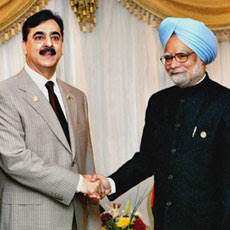 The uproar in the Lok Sabha over the joint statement between PM Manmohan Singh and PM Yousuf Raza Gilani was predictable. The truth is that there is no Indian strategic policy towards Pakistan, only tactics. No long-term goals, only endless ‘debates’ over short-term gains and losses.

There is, in reality, no national consensus over Pakistan, only national confusion. We, as a nation, are still not clear about the kind of Pakistan that we want in the future: a stable, prosperous country, or a fragile and failing state, or disintegrated multiple Pakistans. This lack of a clear long-term view is rooted both in the nature of the

India-Pakistan conflict and in multiple views about our western neighbour. What is needed is a comprehensive, coherent and systematic grand strategy. But who has the will and imagination for this huge task?

The reality is that the conflict between India and Pakistan is easy to describe, but painfully difficult to understand. Enduring rivalry, sustained conflict, ugly stability: these terms, often used by scholars of international relations to capsule the relationship, are sadly—more often than not—occidental attempts at forcing an eastern intellectual puzzle into a preconceived western mould. Unfortunately, the India-Pakistan relationship is and has been about almost everything that matters: history, memory, prejudice, territory, identity, religion, sovereignty, ideology, insecurity, trust, betrayal and much much more, in a very desi way.

Therefore, Pakistan evokes passion like few other countries, especially in northern India. Anger and nostalgia, hatred and sympathy, contempt and fear combine to produce an intensity of emotions that are difficult to reduce to a well defined analytical category. Traditionally, the security community in India has been overwhelmingly in support of a policy of aggressively countering Pakistan. These are the macho Subedars. Only a minority has wanted to ignore and benignly neglect Islamabad or integrate it economically: the Saudagars. Only a microscopic few wanted New Delhi to be proactive in promoting peace, even to the extent of making unilateral concessions. These are the Sufis.

Most of the Subedars argue— and often with considerable evidence—that New Delhi, despite persistent efforts, has been unable to inject a modicum of civility and stability in bilateral relations. For them, the Pakistan conundrum presents perhaps the most intriguing example in the history of state-to-state relations since the Treaty of Westphalia. They believe that neither military defeat, nor constructive engagement, nor unilateral gestures, nor passive disregard and not even international pressure seem to be able to reduce the pathological hostility that the Pakistani state bears towards

India, and which (in this view) goes much beyond the problems in Kashmir. They view the Pakistani state, and its most important institution the army as having an-anti India posture as its raison d’etre, and often argue that only a dramatic reconstruction of the Pakistani state would create the possibility of peace in South Asia.

Pakistan is the most prudent option; or at best doing business with them only in the soft non-conflictual areas. The Saudagars argue that India should, more or less, bypass Pakistan and indeed South Asia, as it emerges as a major economic player in the international system.

But there has always been a small section of Indian opinion that believes that New Delhi —more than ever before—–has a stake in the future of Pakistan. A few years ago PM Vajpayee unambiguously stated that Pakistan’s stability was also in India’s national interest (as has been restated by PM Singh) and this is echoed by the Sufis. They argue that Vajpayee’s statement was not a political slogan, but a harsh reality. True, Pakistan’s demise may finally bury whatever is left of the two-nation theory, but that would be too heavy a price merely to prove that a mistake—huge as it may have been—was made 57 years ago. Pakistan needs to survive, not just for the sake of its own citizens, but also for the health of the whole of South Asia.

They argue that on paper, the option of ignoring Pakistan may seem desirable, but in reality it is an option that is unsustainable. It is extremely difficult to ignore Pakistan if Islamabad does not want to be left alone. As long as Pakistan continues its support for militancy and violence in Kashmir and other places, and seeks to portray South Asia as a region on the brink of a nuclear war, it will be almost impossible to look the other way.

It was Pervez Hoodbhoy, a nuclear physicist in Islamabad and an anti-nuclear activist, who put it most graphically: “Pakistan’s state is already fractured by multiple violent ethnic and religious conflicts. Disintegration into molecular civil war with fiefdoms and warlords is a terrible possibility. India will find, too late, that it has created a South Asian nuclear Somalia for a neighbour.” A nuclear Pakistan, on the verge of economic and political disintegration, will be a danger to the whole region. Even the Subedars would agree that nuclear deterrence stability requires a modicum of political stability and control. In other words, political turmoil and economic chaos in Pakistan can create conditions in which nuclear stability in South Asia could be seriously threatened.

Today, the Subedars, the Saudagars and the Sufis need to come together and shape a Pakistan policy with three elements: maintain a security vigil and sustain a deterrent capability at all levels, engage Pakistan at all levels to further cooperation in areas where business is possible and prepare for a fundamental change in Pakistan’s policy in core areas, including on Kashmir, and grab the opportunity whenever it presents itself.

Only once all three views come together can we truly build a real consensus and a long-term strategy towards our troubled and troublesome neighbour. That is the real challenge for Indian policy.