The Jammu & Kashmir elections and after 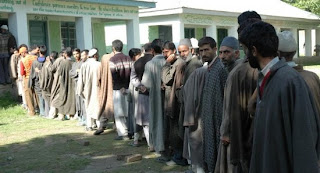 Elections in Jammu and Kashmir are much more than a democratic ritual. In the popular Kashmiri imagination, they have been powerful symbols: of faith and betrayal; of resistance and accommodation; of hope and disillusionment; of confidence and uncertainty.

Through the 1950s and the 1960s, stage-managed elections were seen as a betrayal of the ‘trust’ of 1947. The 1977 elections, the fairest the State had witnessed since Independence, became a lietmotif of faith and accommodation. The 1987 election, neither free nor fair, paved the way for militancy in the State. Confidence in the democratic process was restored to a considerable extent when for the first time the electorate was able to dislodge the then ruling party in 2002.

The 2008 elections will also be recognised as a marker in terms of its inclusiveness and credibility, despite the considerable odds. While 43.69 per cent of the electorate voted in 2002, this time the figure was 61.49 per cent — respectable by any national or international standard. More significantly, all the districts of the Kashmir Valley (outside Srinagar) witnessed a healthy turnout of more than 45 per cent. Kupwara and Bandipora, once at the heart of separatist politics, registered 68.22 per cent and 59.66 per cent respectively.

The real long-term importance of the 2008 elections, however, will lie in the manner in which New Delhi and the State government respond to the aspirations of the people and to the multiple challenges that exist within the State. That the people of the State, who took to the streets in Kashmir a few months ago in a mass Intifada-like uprising (or on the streets of Jammu shouting Bam Bam Bhole) should turn out in even larger numbers to vote in the elections may be seen by cynics as evidence of fickleness. This would be a mistake: the “ordinary” citizen is seizing every opportunity to achieve peaceful change from the politics of the street to the politics of the ballot.

New Delhi must not view the elections as signalling a return to “business-as-usual” in the politics of the State. The triumph of democracy should not be a moment of triumphalism. By acting in a statesmanlike fashion now, New Delhi and Jammu/Srinagar will demonstrate a willingness to reward participation in the democratic process and will not be seen as capitulating to extra-constitutional pressure.

For New Delhi, the Working Group reports offer a perfect starting point. Set up during the second round table conference called by the Prime Minister in May 2006, the five Working Groups had a specific agenda. The elements of this agenda were confidence building measures (CBMs) across segments of society in the State; strengthening relations across the Line of Control in Kashmir; economic development; ensuring good governance; and Centre-State relations.

Chaired by Hamid Ansari, that group had recommended, inter alia, several steps. These included a review and revocation of laws that impinge on the fundamental rights of common citizens, such as the Armed Forces Special Powers Act; a review of cases of persons in jails and general amnesty for those under trial for minor offences. It recommended effective rehabilitation policies for Kashmiri Pandits and a comprehensive package to enable them to return to their original homes and to help the Kashmiri youth in Pakistan-controlled areas who may have joined militancy for monetary considerations or misguided ideological reasons. Another recommendation involved measures to strengthen the State Human Rights Commission and the setting up of a State commission for minorities.

The Centre must consider revamping the Fifth Working Group on Centre-State relations which failed to arrive at a consensus. A new expert group can consult with all stakeholders to forge common ground on issues such as autonomy, self-rule, regional balances and sub-regional aspirations.

The State government must pay attention to the recommendations of the Working Group on ensuring good governance in the State. These include the appointment of a Chief Information Commissioner for the effective implementation of a more robust Right to Information Act, the introduction of e-governance — to make government at the district and tehsil level more efficient, accountable and transparent. Another recommendation was for the extension of the 73rd amendment to truly empower the panchayati raj system.

However, the immediate priority must be to devise and implement a comprehensive policy for the young men and women of the State. The State has had consistently high levels of educated unemployment and low levels of vocationally skilled human resources. With more than 2,00,000 unemployed, and in many case unemployable (other than as white collar workers for the government), the youth have formed the bedrock of the militant movement over the last two decades. The challenge is to use this energy of the young Kashmiri to build peace.

Re-training hubs must be established in all the district headquarters to ensure that a significant section of the educated but unemployed youth become employable within a period of six months to a year. With the extensive use of Information and Communication Technology, it should be possible to annually produce more than 20,000 skilled and employable workers from the 22 district re-training centres. These centres could be established through public-private partnership or by creating a special purpose vehicle (SPV). Public-private partnerships are also needed to enhance international connectivity by extending broad band access — with stronger incentives provided through the existing universal access funds for telecommunications. In the long term, given the geography of the State and its growing endowments of skills, electronic exports of services may play a more significant role in revitalising its economy than the traditional sectors.

The youth of the State can become its greatest strength, its soft power. Investing in the right kind of education, training and skill development have therefore to be part of the fundamentals of the new government if it has to take advantage of the huge demographic dividend. It is vital that the gross enrolment ratio in higher education rises to at least 15 per cent in the next 10 years. This calls for a massive expansion in education: more universities, more off-site campuses, more colleges, more Industrial Training Institutes and more polytechnics that extensively use the revolutionary new instruments of Information and Communication Technology to deliver world-class course-ware content.

The State government must consider building a knowledge city where there is a seamless transition from studying to training to working within the same geographical space. The Dubai Knowledge village is one, but it is not the only example. The raison d’etre was a long-term economic strategy to develop the region’s talent pool and accelerate its transition into a knowledge-based economy. The benefits for partners include 100 per cent foreign ownership, 100 per cent exemption from taxes, 100 per cent repatriation of assets and profits, and effortless visa issuance. Imagine a knowledge city in a valley on the foothills of the Himalayas where potentially the best and the brightest young men and women from all over the region can come and study, live and work together in a setting that offers world-class infrastructure.

Will the State and the Central government respond to this new peaceful assertion of the people of J&K for real change? Unfortunately, the announcement of the highest civilian awards on Republic Day-eve was a grim reminder that the bureaucratic stronghold on policies towards Jammu and Kashmir may not be easy to dislodge. Hashmat Ullah Khan may or may not be a deserving awardee. But the incident is a powerful metaphor for the New Delhi establishment’s traditional patron-client mindset towards Jammu and Kashmir. Bureaucrats in the corridors of Lutyen’s Delhi, long out of touch with the reality on the ground, use their power of patronage to craft policies that have no resonance with the majority of the people of the State. This mindset has to change if the people of Jammu and Kashmir have to be rewarded for having overwhelmingly expressed their faith in democracy.

Posted by Amitabh Mattoo at 8:58 AM