The success story of LTTE 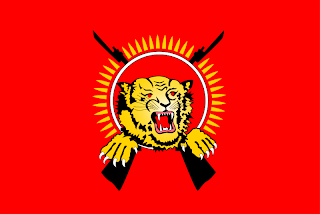 The LTTE's dream of an independent "Eelam" may not be easily realized, but it is clear that the Sri Lankan army too will find it very difficult to militarily defeat the LTTE. Not surprisingly, Sri Lankan President Chandrika Kumaratunga revealed recently that she had offered to hold talks with LTTE leader V Prabhakaran at least three times during the last two years, but he had rejected all efforts at a peaceful negotiated settlement of the ethnic war. Indeed, despite the LTTE being declared a terrorist organization by virtually every important state in the international system, it still continues to be the most powerful Tamil political organization in the world with supporters in virtually every part of the globe. It is believed that LTTE raises more funds overseas, especially in Europe and North America, than any militant organization in South Asia.

What accounts for the Tigers' success and the failure of successive Sri Lankan governments to combat them effectively? There are at least three reasons for the LTTE's continued strength. First, the Tamil Tigers have a formidable military presence. Estimates about numbers vary, but it is generally believed that the organization has a cadre of at least 5,000 men and women. The LTTE consists of four wings: army, navy, anti-aircraft wing, and Black Tiger wing, which consists of members who sacrifice their own lives in suicide attacks on major military installations and political leaders. It was a member of the Black Tiger wing who was responsible for the suicide attack that killed Rajiv Gandhi.

The Tigers' military strength is also rooted in the fact that they have, over time, been trained by some of the most effective intelligence agencies in the world, including Israel's Mossad, India's Research and Analysis Wing (RAW) and Pakistan's ISI. Indeed, at one stage in 1989, they were supplied with arms and information even by the Sri Lankan army, which wanted them to defeat the Indian Peace Keeping Force (IPKF) that had been deployed there. This was revealed recently by Sri Lankan army officer Lt Priyalal Wishwakumar, who claimed that he had personally delivered four truckloads of T-56 automatic rifles to the Tigers on the instructions of then President Premadasa. However, once the IPKF had moved out, the same weapons were used to slaughter members of the Sri Lankan armed forces.

Quite clearly, Prabhakaran's leadership has been extremely important in the success of the Tigers. While the world views him as a fascist dictator, to the Tigers he is the "supremo," the elder brother in whom they have reposed complete faith.

Prabhakaran's heroes include Alexander, Napoleon, Subhash Chandra Bose, Bhagat Singh and Bal Gangadhara Tilak. By all accounts, he is a brilliant military strategist, as well as deeply feared and respected by the cadre. Ruthless and temperamental, Prabhakaran is totally uncompromising in his demand for an independent sovereign Eelam.

Finally, whether we like it or not, the LTTE still seems to speak for many Tamils, especially those who have, over the years, faced discrimination and persecution at the hands of the Sri Lankan state. Most other Tamil organizations are inactive or dead. Recall that Prabhakaran set up LTTE, also known as the Tamil National Army, in May 1976 after growing Tamil anger and frustration with the policies of the Sri Lankan government. Indeed, the Tamils' alienation goes back to the late 1950s after the government led by Solomon Bandaranaike, father of the present president, enacted the "Sinhala only" law, making, with one stroke of the pen, the significant Tamil-speaking minority, concentrated mostly in the North and the East, second class citizens.Asia.

But it was legislation which was designed to cut the number of Tamils in universities, and which gave Buddhism the foremost place in the country in the 1970s, that led to the deep political and social discontent within the Tamils. This was compounded by the anti-Tamil riots of the late 1970s and the massive human rights violations that were inflicted by the Sri Lankan army in the 1980s. Hundreds of thousands of Tamils fled the country, many as refugees to India, and countless others were killed.

The LTTE has successfully snuffed out most moderate Tamil voices. Dissent is rarely tolerated and any Tamil organization or leader who participates in electoral politics becomes an automatic target. One of the recent victims was charismatic lawyer Neelan Tiruchelvam. The Sri Lankan government may have only contempt for it, the world may despise it, but there unfortunately is no alternative to dealing with the Tigers if sustainable peace has to be achieved in Sri Lanka.

India's policy must be predicated on three critical elements: First, a firm pledge to the unity and integrity of Sri Lanka; second, a commitment to minority rights, pluralism and secular democracy in the state; and opposition to external intervention in the island. If India has to play a role, it must primarily aim at getting the LTTE and the Sri Lankan government together at the negotiating table.

Posted by Amitabh Mattoo at 4:07 AM