Behind The Buddha's Mask 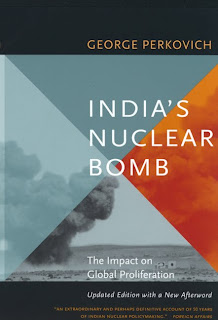 It is hard to believe that an American policy analyst, who directs a Virginia-based foundation that's explicitly geared to promote non-proliferation and disarmament, would produce the most masterly account of India's nuclear policy. India's Nuclear Bomb by George Perkovich, director of the Secure World Programme of the W. Alton Jones Foundation, is a scholarly tour de force. While Perkovich's conclusions are debatable and his theoretical premises more than a little shaky, his story of India's nuclear programme is the most complete and nuanced account ever written. No other book on the subject comes close to this compelling and illuminating narrative that traces the history of the nuclear programme from its modest beginnings in the Tata Institute of Fundamental Research in '45, to the dramatic nuclear tests at Pokhran in '98.

India's Nuclear Bomb reinforces the thesis that there is a greater deal of continuity to India's present nuclear policy than is usually imagined. In other words, India's nuclear weapons programme and policy must not be seen as the product of the BJP's right-wing agenda, but is rooted in a process that goes back to that usually unassailable champion of disarmament, Jawaharlal Nehru. Perkovich ably documents Nehru's contradictory statements which revealed, at the very least, that he recognised the potential security benefits of India's civilian nuclear programme even while New Delhi led the cause of nuclear elimination in multilateral fora. While Shastri and Indira Gandhi's inputs into India's nuclear programme are well known, Perkovich reveals with rare insight the role played by Rajiv Gandhi and V.P. Singh in furthering weaponisation. In 1985, Gandhi and in 1990, Singh set up secret committees on the nuclear issue. The 1985 committee, which included General Sundarji, Vice Admiral K.K. Nayyar and the Atomic Energy Commission's R. Chidambaram recommended that India build a minimum deterrent force, "guided by a strict doctrine of no-first-use and dedicated only to retaliating against a nuclear attack on India". A doctrine not very different from the one drafted by the National Security Advisory Board last year. And in 1990, a committee which included Sundarji, K. Subrahmanyam, Arun Singh and representatives from the AEC and DRDO developed plans to "ensuring that in the event of a nuclear attack on India, the government would continue to function and be able to deliver nuclear retaliation". Among its conclusions, the group called for "designating air force units to receive nuclear devices and deliver them according to previously prepared orders".

In short, by 1990 India had a rudimentary nuclear deterrent in place, and every successive government, including the United Front government that included parties from the Left, has at least approved of the programme. Thus, the 1998 tests were only a dramatic manifestation of nearly a decade-old reality. While Perkovich's narrative is superb, it is while trying to locate his account within the theoretical debates of international relations that he falters. In asserting the importance of the 'strategic enclave' (a loose grouping of scientists, analysts and engineers) and other domestic reasons in furthering India's nuclear weapons policy, and underplaying the importance of national security reasons, he misses the wood for the trees. Domestic reasons do play a role in the formulation of any policy, but to not recognise sufficiently the deep impact of the Chinese and Pakistani nuclear programmes in advancing Indian weaponisation is surely reductio ad absurdum.

Similarly, Perkovich suggests that "open, democratic debate may inhibit decisions to make nuclear weapons, but democracy as it is practiced today appears to obstruct efforts to control and eliminate nuclear weapons once they have been acquired". This is a controversial thesis that will be challenged by all those who believe that democracy and peace are intrinsically linked, but it is undoubtedly a subject worthy of further research. For, all the countries that have given up nuclear weapons were non-democratic: South Africa, Belarus, Kazakhstan and Ukraine. If Perkovich's argument is accepted, the prospects of nuclear disarmament are indeed bleak. Because today seven of the eight recognised or threshold nuclear weapon states are democracies.

However, Perkovich's strength does not lie in the theoretical conclusions which are at best tentative but the manner in which he has been able to blend recently declassified American material with extensive interviews, off and on the record, with top Indian sources. It is a strange irony, however, that Indians who make the loudest noises about nuclear apartheid and colonialism did not shy away from providing a Western scholar with the most intimate details of India's nuclear programme. Sadly, we have to rely on George Perkovich rather than a 'swadeshi' scholar for the most detailed and authentic account of India's nuclear policy. But then this is a country which, through some unidentified mole, allowed the British journalist, Neville Maxwell, access to the official Henderson Brooks report on the disastrous 1962 war against China, but still does not allow its own citizens to read the report. Tragically, not even the possession of nuclear weapons will allow us to deter our worst enemy: colonialism of the mind.