Australia and India have never been closer 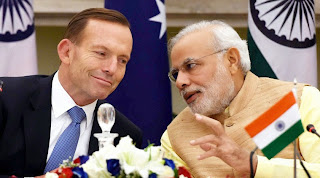 When Narendra Modi arrives in Melbourne on November 18, he will be the first Indian Prime Minister to visit the city   for a bilateral visit, since Indira Gandhi was hosted by John Gorton in May 1968. Unlike Gandhi's visit, which is remembered today only for its insignificance, Modi's Australian yatra promises to be the most important ever made by an Indian prime minister for both countries' bilateral relations.

Consider this: In Melbourne alone, he will attend four functions, two at Government House and two at the MCG. The Governor will host a chief executives' round table at which Modi will have the opportunity to interact with a who's who of Australian business, including Anthony Pratt, of Visy Industries, and Gina Rinehart, of Hancock Prospecting. Later, he will address more than 500 business leaders, before leaving for the MCG where Prime Minister Tony Abbott will host a reception for 1000 select guests and a dinner for 500.

Modi's schedule elsewhere in Australia is equally packed. Quite apart from the G20 meeting, he will unveil a bust of Mahatma Gandhi in Brisbane, attend business breakfasts, speak to a crowd of more than 15,000 Australian Indians in Sydney, address both houses of Federal Parliament and hold bilateral talks with Abbott. For each public event, there has been a scramble for seats and invitations.
But Australia is not alone here. India's Prime Minister, once a controversial and even polarising figure, has taken the world by storm. In its recent list of the world's most powerful people, Forbes magazine described Modi as India's newest rock star who doesn't hail from Bollywood. Many expected him for his first year in office at least to look inward, focusing mostly on domestic issues. But in the less than six months that he has been Prime Minister, Modi has visited Brazil, the United States, Bhutan, Nepal and Japan, and hosted leaders from South Asia, China and Vietnam. This outward-looking, activist stance has revived hopes that India may at last achieve its potential as a major economic and strategic player.

No one quite remembers the last time an Indian leader demonstrated this kind of chutzpah – an approach to leadership that is energising citizens in India and wowing audiences internationally. One Australian business leader compared Modi approvingly to Singapore's Lee Kuan Yew: a benevolent, authoritarian, incorruptible leader who could transform his country. Another compared his non-ideological economic pragmatism to that of China's Deng Xiaoping who modernised the communist country. Modi, with his usual fondness for alliteration, sees India's unique selling point as its unbeatable combination of the Three Ds, democracy, demand and  demography – that is, the rule of law, its huge market of nearly 300 million middle-class Indians, and the youth bulge of more 500 million Indians under the age of 25, who could become part of a global workforce in an otherwise ageing world.

Together Prime Ministers Abbott and Modi have the chance to transform the bilateral relationship between their countries from one characterised by missed opportunities into a genuine strategic partnership. The long shadow of the Cold War, India's autarkic economic policies, the White Australia policy, and Canberra's decision not to transfer uranium to India, have kept the two countries apart for several decades. But this is now history.

Today, few countries in the Indo-Pacific region have more in common in both values and interests than India and Australia. Apart from being two English-speaking, multicultural, federal democracies that believe in and respect the rule of law, both have a strategic interest in ensuring a balance in the Indo-Pacific and in ensuring that the region is not dominated by any one hegemonic power. In addition, Indians are today the largest source of skilled migrants in Australia.

The extent of Australia's and India's common interests was reflected in the 36-paragraph joint statement that concluded Abbott's visit to India early in September. From water management to clean energy, from trauma research to skills and higher education, from maritime and cyber security to counterterrorism, a world of opportunities awaits the two countries if they can work in harmony.

Late last year, the Australia India Institute at the University of Melbourne and Sydney's Lowy Institute commissioned a comprehensive survey of Indian public opinion on foreign policy and governance challenges. Indians ranked Australia in the top four nations towards which they feel most warmly. Only the United States, Japan and Singapore ranked higher. Indians feel warmer towards Australia today than towards countries in Europe, including Britain, or India's fellow emerging economies in the so-called BRICS group.

Relations between India and Australia have deepened dramatically over the past decade. India's economic growth and its burgeoning demand for energy, resources and education have made it suddenly one of Australia's largest export markets. Beyond the trade links, there is the shared concern in Canberra and New Delhi about security and stability in the Indo-Pacific region. Both India and Australia have deep economic relations with China, but equally both are concerned about Beijing's aggressive behaviour in the recent past, and would ideally prefer the region not to be dominated by any single hegemonic power. In the past Canberra has shied away from an explicit military partnership with India, Japan and the United States.

This may well change in coming months. Both Modi and Abbott are seen as China sceptics, open to a more candid assessment of China's rise and its consequences for the region. The Australia-India relationship is clearly an idea whose time has come, but it will require political nurturing before it acquires a momentum of its own. Fortunately, Modi and Abbott have bonded well.

In her forthcoming definitive account of bilateral relations, historian Meg Gurry relates how Arthur Tange, high commissioner to India and one of Australia's most formidable diplomats, wrote in 1965 to his foreign minister, Paul Hasluck, that there was fertile ground between the two countries, but "no one seems to know what seeds to plant". Fifty years on, there are not only many seeds waiting to be planted, but much ripe fruit ready to harvest.

Posted by Amitabh Mattoo at 3:08 PM