India beyond the clichés: we've got some catching up to do 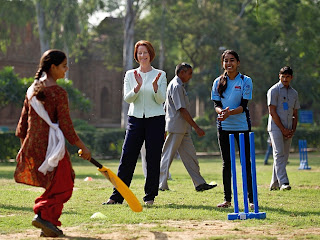 As Canberra begins to translate its vision of “Australia in the Asian Century” into reality, it is reassuring that a renewed focus on the continent has bipartisan support. Last week, the government announced its implementation plan to act on the recommendations of the White Paper released by Prime Minister Julia Gillard in October 2012.

While the Significant Investor Visa Scheme has attracted some controversy, the plan is – for the most part – thoughtful. For instance, the AsiaBound grants program and the proposal to further assist university students wanting to study in Asia, as well as the Asian Century Business Engagement Plan to assist businesses to “harness the opportunities emerging in the region” are commendable initiatives.

Earlier, on March 22, the Menzies Research Centre hosted a policy roundtable at Parliament House, Canberra, on the Coalition's proposed New Colombo Plan. This plan is, inter alia, an ambitious initiative to encourage Australian students to undertake study in universities in the Asia-Pacific region.

On the occasion of the round-table  the federal Opposition Leader, Tony Abbott, signalled an unusual consensus on the new engagement with Asia, even in these otherwise Manichean political times: “[S]o much that happens in this building is fierce and partisan. So much that happens in this building is all about the large egos of the people who strut and fret their hour upon the stage but hopefully what we do today is about the 'better angels of our nature', it is about things that will make a lasting difference to our country and our world.”

These initiatives are undoubtedly encouraging and do suggest that no matter who is in government in September, Asia will firmly remain at the centre of the policy radar screen. What is critical, however, is to recognise that the real promise of the Asian Century will be realised only if Australia shows patience and a readiness to provide the substantial budgetary support necessary to build the capability to engage with the main protagonists of the Asian century.

This is particularly true of India: the world's largest democracy and federation; the third largest global economy (by gross domestic product in purchasing power parity terms) with a growing and almost insatiable appetite for natural resources; home to over a billion people with the largest pool of young human capital needing to be trained, skilled and educated; one of the biggest markets across segments and a hub of research and “frugal” innovation; and yet continuing to be the land of the starkest contradictions and diversity on the planet.

Doing business with India, political or economic, eludes any quick fix or magic mantra (as Australian governments and businesses know only too well from present and past experience) and it requires, at the very least, a sustained and long-term commitment to creating a cadre of India specialists – in the public services, universities, in business and the workforce – who can interpret the country, work as a bridge to what should be one of the most important objectives for Australia in the Asian Century.

For make no mistake, Commonwealth, curry, cricket and the English language are red herrings. These commonalities will do little to help businesses, political leaders or even academics engage meaningfully with India.

Australia's understanding of India today, with all its complexities, is severely limited. Until about three decades ago, Australia could claim to be one of the principal centres in the world for the study of India, in various disciplines, and some of the most exciting work on India came from Australian universities. Australia would have already been India-capable if that had been sustained. That, however, did not happen as departments were closed and academics retrenched.

There are signs of a renaissance in Indian studies, particularly in Victoria. The Australia India Institute, funded by both Canberra and the state government and based at the University of Melbourne, is a concrete expression of this trend, with its teaching, research, public policy and outreach programs. Building an India-capable Australia requires more states, territories, businesses and universities to come together to forge new partnerships on India.

There are already some good examples. Victoria has developed a well thought out and nuanced strategy of long-term engagement with India; it has provided doctoral scholarships to the best and brightest of Indian students; its annual trade missions expose Victorian businesses to the opportunities India offers; it convenes an annual roundtable of vice-chancellors from India and the state to promote research collaboration; it has partnered the University of Melbourne in sponsoring a professorial chair in contemporary Indian studies; and, together with the federal government, it has provided significant support to the Australia India Institute. This model of partnership must cut across states and territories if we are to create an India-capable Australia.

In a recent interaction with the Confederation of Indian Industry, the vice- president of the ruling Congress party, and a likely candidate for the prime ministership, Rahul Gandhi, described India as resembling a “beehive”; complex, decentralised, noisy but bustling with energy and determination. The world – he suggested – expects simple answers from India, which will never happen.

But India, he argued, is a training ground of tomorrow's complex networked world. Anyone who succeeds there will acquire a competitive advantage because the business practices that emerge from the complexities of India will have a global robustness.

This is the Indian reality that Australia has to cope with in the Asian century, and it demands a systematic, long-term investment. “India”, one of Australia's most formidable diplomats once said, “tests your patience”. But as he wisely concluded, “it always rewards the patient”.

Posted by Amitabh Mattoo at 5:09 PM