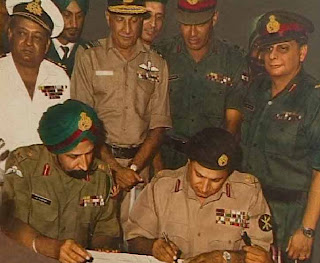 Forty years after the creation of Bangladesh, there has been — in the Indian press — an outpouring of euphoria for what many have described as India’s greatest strategic achievement since Independence. And while in military terms it was undoubtedly a major accomplishment, many of the early policy conclusions that followed the war and the India-Pakistan agreement in Shimla in 1972 were proven wrong. In other words, with the benefit of four decades of hindsight, the Bangladesh War may have been a great tactical victory, but the strategic fruits that were to follow, especially, in terms of long-term peace in South Asia are still not on the table.

The humiliating defeat of Pakistan in the 1971 war, the dismemberment of the state, and the Shimla Agreement of 1972 are now widely viewed as Prime Minister Indira Gandhi’s greatest contribution to the nation. The debates, if any, have focused primarily on the role played by various institutions in creating and executing the policy which resulted, inter alia, in General Jagjit Singh Aurora, the Indian Eastern Army commander accepting the Instrument of Surrender from the head of the Pakistani forces, General A A K Niazi, on December 16, 1971 at Dhaka.

Till a decade or so ago, in many an army mess the roles played by Aurora, General J F R Jacob (the chief of staff, Eastern Command) and the army chief, General (and later Field Marshall) S H F J Manekshaw used to be hotly debated. Jacob has since written his version of the war. Within the intelligence agencies, it is R N Kao, founding head of R&AW who is lionised and the brilliant strategic analyst B Raman has reminded us of the contributions of spymasters whose analysis (and the role played in the creation of the Mukti Bahini) was critical, including the vital inputs of K Sankaran Nair, Brigadier Hassanwalia, Major General Uban, and Gary Saxena. There is also a larger historical debate, which will continue to be played out, on the thinking, planning and objectives of the Indian leadership, and the role-played by the outside powers, especially the United States, the Soviet Union and China.

What has grabbed less attention is the expectations within the establishment about the larger strategic consequences of the 1971 victory and Shimla. There must have been at least three expectations. First that as a consequence of 1971, Pakistan and indeed the entire region would recognise the superiority of Indian military and would be unwilling to take the risk of confronting India. It was hoped that not only would the 1962 debacle of the Chinese war and the stalemate of the Indo-Pak war of 1965 be erased from the collective memory of the region, but that the smaller states would begin to accept the dominant role that India would play in the region to the exclusion of outside states (almost an Indian Monroe doctrine). Second that there would be a settlement of Jammu and Kashmir with the LoC becoming the de facto international border. Indira Gandhi’s then secretary, P N Dhar has confirmed that Z A B Bhutto, then Prime Minister of Pakistan, had agreed to this unwritten understanding at Shimla. And finally that Pakistan as a state would reform itself in at least two ways. One, by accepting that the creation of Bangladesh had proven the fallacy of the two-nation theory and of the role of religion as a binding force for nationhood. Thus it was expected that Pakistan would devolve greater power to the provinces and move beyond Islam as the raison d’être of the state.

Finally, there was the hope that Pakistan and especially the Pakistan army would also transcend its pathological India hostility. To prevent a Versailles type syndrome (the combative nationalism that was witnessed in Germany after its humiliating defeat in the World War I) Indira Gandhi not only treated Bhutto with utmost respect and regard at Shimla, but agreed to repatriate thousands of Pakistani Prisoners of War without any conditions and did not insist on a written agreement on Jammu and Kashmir. P N Haksar, Indira Gandhi’s adviser with a great sense of history apparently was principally instrumental in ensuring that Bhutto went back after Shimla, a hero to his people rather than a discredited leader of a defeated nation.

In retrospect, these expectations were either misplaced or subsequent Indian policies did not build sufficiently on the 1971 and 1972 achievements. Not only was Indian power not recognised in the years after 1971 by Pakistan, but also many of the smaller states, including Sri Lanka, thought of crafty ways of challenging Indian dominance. In the years that followed the assassination of Sheikh Mujib (the father of its independence movement), Bangladesh itself became — in cycles — a source of grave instability for India and was once the favourite hunting ground of ISI agents. The jury, unfortunately, is still out on whether the current bonhomie in bilateral relations will outlast present Prime Minister Sheikh Hasina’s tenure. In Pakistan itself, the Bangladesh War — contrary to Haksar’s hopes — became the new Versailles. The Bangladesh syndrome arguably produced the policy of ‘bleeding India with a thousand cuts’ as avenging 1971 became the principal unstated doctrine of the Pakistan army. Changing borders was no longer taboo, and Bangladesh gave a perverse institutional legitimacy to Pakistan army’s designs to do the same to India.

Religion instead of becoming epithermal to the Pakistani state, overwhelmed it. General Zia-ul-Haq’s years (that followed the military coup against Bhutto) led to a new radicalisation (aided by the Afghan war) and produced a generation of extremists that have permeated into all institutions of the state, including the army. Bhutto himself reneged on any understanding on Jammu and Kashmir that he may had in Shimla, and subsequent leaders of Pakistan helped to create the monster of militancy (aided by our own follies) in J&K that has almost permanently scarred the psyche of the people of the state.

In sum, as we celebrate a milestone in the history of nation — which we hope will be peaceful and prosperous — the Bangladesh syndrome is more than just about victories and agreements. Bangladesh perhaps teaches us that unless political, diplomatic, economic and social initiatives build on military victories, they can remain ephemeral.