Answer is as Complex as the Situation 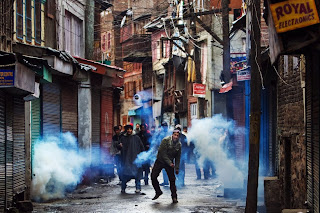 WHENEVER there is a crisis in Jammu & Kashmir, we like to find a scapegoat. This is an easy escape route that unfortunately prevents us from taking a comprehensive view of the complexity of the problems impacting the state. Consider the history of the problems. In 1953, Sheikh Abdullah was dismissed after it was believed that he was part of an Anglo-American plot to wrest the Valley from India. In 1964, Bakshi Ghulam Mohammad was the scapegoat after massive protests that followed the theft of the holy relic. The pattern continued through subsequent decades.
Today, there is rage among the youth of the state. It is anger that stems from two decades of conflict, the violence, curfews, killings and a near-total breakdown of the system. This angst, disillusionment, frustration — call it what you will — demands attention and sensitivity from the Indian nation: from the government of India, from civil society, from corporate houses, and especially from the media. Every Kashmiri young man and woman needs to be given a vision of the future, a vision full of opportunity and where he or she feels secure in every sense of the term. And that vision has to be translated into reality. This requires a detailed roadmap, out-of-the-box thinking, and a willingness to reach out at every level.
It is often asked why J&K should be considered a special case. Kashmir’s singular importance to the very idea of India is often forgotten. A Muslim-majority state that voluntarily acceded to India in 1947 lent tremendous strength to the construction of India as a vibrant, secular and pluralistic state. The battle, therefore, to win back the hearts and minds of the Kashmiri youth is critical not just for strengthening the ideals that inspired Indian nationhood, but is central to the war against extremism and fundamentalism. In other words, Kashmir must no longer be dealt with the kind of political ineptitude and bureaucratic inertia that has often characterised the Centre’s policies towards many other states. And let me say this clearly: it is not just the youth in the Valley but the Dogra youth of Jammu and the Kashmir Pundit youth in migrant camps that demand equal attention.
(Source: The Economic Times)
Posted by Amitabh Mattoo at 9:26 AM