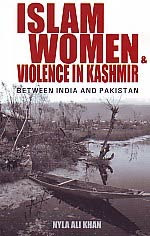 A new generation of Kashmiris who underwent their rites of passage during the last two decades of violent conflict are now speaking out. From the columns of Greater Kashmir, the Valley's largest English daily, to Basharat Peer's powerful memoir Curfewed Night, we were witnessing an extraordinary intellectual churning that demands attention. Inevitably soaked in blood and tears, the narratives of these young men and women are challenging the dominant discourse and orthodoxies that have caged . Nyla Ali Khan, who teaches at the University of Nebraska-Kearney, , is the granddaughter of Sheikh Abdullah, unarguably one of the most popular Kashmiri leaders of the 20th century. A cousin of Chief Minister Omar Abdullah, Khan was schooled in and is the daughter of the genteel Suraiya Ali. The only academic amongst Sheikh's children, it is Ali's intellectual genes that have been passed on to Khan rather than the more dominant political DNA of the rest of the Abdullahs.

In this book, Khan analyses the cultural and religious roots of 's history with particular attention to events during the post-1947 decades and how they have impacted the lives of women. What sets it apart from the innumerable books written on during the period of insurgency is the woman's perspective she brings to her study. Khan uses the analytical tools of postmodern, feminist criticism to understand and highlight the role--passive and active--that women have played in Kashmir's history, ranging from the 14th century Lal Ded, a mystic poet who laid the foundations of Kashmir's syncretic culture, to the present day Parveena Ahangar who represents the Association of the Parents of the Disappeared People. In between are oral histories of women who were part of the Women's Defence Corps set up in 1947 after the Pakistan-backed tribal invasion of . The bravery of these women who were ready to fight for Kashmir's integrity as a secular space has been largely ignored in all discourses on so far and it is for the first time that their stories have been given the credit they deserve.