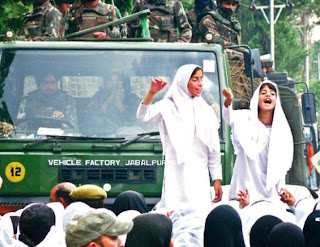 Shopian was once synonymous for the best Amri apples and delicious traditional cheese of the gujjars. It was at the centre of the Mughal road that once connected Kashmir valley to the plains. But that is history. In the last week of May, the bodies of Asiya and her sister-in-law Nelofar were found here after they went missing from an orchard.

Whatever may be the final conclusion about the cause of their death, there are few in Shopian who are willing to believe that the security forces were not involved in the rape and murder of these two women. In many ways, the town has come to symbolise the Kashmiris’ collective lack of trust and faith in the state. And there will be many more uprisings in the days to come, if New Delhi does not take steps to provide healing.

Unfortunately, the understanding of Kashmir, despite all these years of problems, remains shallow in the corridors of power. When Kashmiris, who took to the streets in a mass Intifada-like uprising last summer, turned out in even larger numbers to vote in the state election, this was mistakenly seen as evidence of Kashmiri fickleness. It was a mistake, therefore, to view the elections as signaling a return to ‘business-as-usual’ in the politics of the state and as obviating the need for a special and more imaginative approach. The triumph of democracy should not have been a moment of triumphalism. In fact, by acting in a statesmanlike fashion, New Delhi would have demonstrated a willingness to reward participation in the democratic process and not be seen as capitulating to extra-constitutional pressure. This unique opportunity was missed.

How should New Delhi respond to this new politics of peaceful positivism? Neither development nor reconciliation can be magically decreed. But much can be done unilaterally and immediately to respond to the deep yearning of the people of the state for security in all its dimensions: that is freedom from fear in the physical, political, economic and cultural spheres.

First, and immediately, to take advantage of the improved situation on the ground, the Government must strike a better balance between people’s rights and the need to deal with militancy. The release of political detainees must be a top priority.

A general amnesty would be a powerful gesture symbolising a new spirit of reconciliation. It is also time to seriously consider returning the armed forces to their pre-1989 position, ensuring (in letter and spirit) a zero-tolerance for human rights violations and repealing many of the laws (district by district) that have given the security forces a virtual carte blanche in the valley. The Jammu and Kashmir Police needs to be given full responsibility for maintaining law and order even while it needs to be further modernised.

Second, and most critically, there is need to respond credibly to the legitimate aspirations for autonomy, self-rule and regional balance. There are initiatives the Government can take unilaterally to signal seriousness of intent, including on issues such as the jurisdiction of Article 356 relating to emergency powers and mode of appointment of the Governor. To deal with the more far-reaching changes, the Government should revamp the working group set up to examine center-state relations chaired by Justice Sagheer Ahmed, which has so far failed to submit a meaningful report. Within a fixed time frame, this expert group should invite inputs from all stakeholders, including the separatists, examine all proposals for devolution, and make clear recommendations. To dispel the notion that this would be ‘one more commission’, the Government should state in advance its willingness to accept and implement the recommendations of this group, including those that seek to address the legitimate grievances of Jammu and Ladakh.

Third, measures must be taken to give more concrete expression to the PM’s vision of “making international borders irrelevant”. Sustainable economic development of the state will not come from more external economic sops, which only weaken the relationship between the people and their government: accountability is the flip-side of taxation. Far more meaningful would be measures that alleviate the economic isolation of the state. The state should be able to benefit more fully from conventional economic opportunities by facilitating regional trade, as well as greater regional cooperation on water, electricity and tourism.

Finally, given the regional (and religious) polarisation in the state, it is essential to establish a Commission for Reconciliation that will recommend measures to revive the traditional spirit of harmony within the valley, between Muslims and Pandits; and between Kashmir, Jammu and Ladakh. The Commission would also work with civil society actors and other stakeholders to help re-build the interdependent relationship that has traditionally existed between different communities and groups. The Commission would also be asked to ensure that every cultural identity in the state finds space and strength, and that the return of Kashmir Pandits soon becomes a reality.