A voice of the Kashmiri people 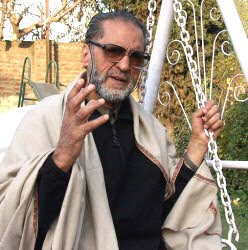 Who was the real Abdul Gani Lone? Peace activist? Militant leader? Politician's politician? Or almost a political statesman? At some stage or another, during his long political innings, Lone had earned each one of these sobriquets. Indeed, one of the fascinating aspects of Lone Sahib's life was that even the most determined political pundit would find it difficult to reduce him to a cliche. However, if there was an enduring aspect to Lone Sahib's political career, it is not just his ability to reinvent himself, but his uncanny, almost intuitive, feel for the pulse of the Kashmiri people. It was here that Lone stood taller than most of his contemporaries. He genuinely reflected the voice of the people of Kashmir, their hopes, concerns and aspirations. And he was ready to change his mind and his politics the moment he felt that he was getting disconnected from the grassroots. This explains not just the reasons for Lone's ostensible lack of political consistency, but his deep commitment to dialogue, peace and non-violence in his current avatar. For, it was his belief that this was what the Kashmiris desired most of all at present, and he was ready to even lay down his life for this goal.

Lone Sahib began his political career in the Congress, at a time when the State was ruled by the Congress Chief Minister, Ghulam Mohammed Sadiq. It is believed that Sadiq's successor, Mir Qasim, was peeved with Lone because even as a Cabinet Minister Lone would frequent the local cafeteria or the neighbourhood barber shop, something unheard of in Kashmir's deeply hierarchical and feudal environment. But then he was unwilling to stop being the people's man. Not surprisingly, when Lone Sahib founded his own outfit, he called it the People's Conference. During the initial years of the militancy in the early 1990s, the People's Conference too boasted of its own armed outfit, Al-Barg. This then was, of course, a reflection of the times. And when the APHC was set up, the People's Conference became part of the umbrella separatist alliance and Lone a member of the executive committee. Indeed, had the People's Conference not had a militant wing, he may not have been accommodated within the APHC's executive committee.

Lone was amongst the first Kashmiri separatist leaders to recognise that the indigenous political movement had been hijacked by Pakistan and that the fate of the Kashmiris was of little concern to Islamabad. During his visit to Pakistan last year for the wedding of his son, Lone was strident in his condemnation of jehadi forces and foreign militants who, he argued, had brought havoc and devastation to Kashmir.

Similarly, as a Kashmiri nationalist, Lone was fiercely opposed to giving a religious colour to the political struggle of the Kashmiri people, and this had brought him in direct opposition to several leaders. As is well known, at a recent conference in Dubai, he reportedly told his Pakistani interlocutors, including the ISI chief, that it was time that they stopped interfering in Kashmir and that the gun had no longer any role to play in the politics of the Valley. Understandably, for his straight talk and his pro-Kashmiri views, Lone had become a target of extremist groups and their supporters.

I cannot claim to have known Lone Sahib well. I must have met him no more than a dozen times in the last six years. But during each meeting, I learnt a little more about Kashmir, became more sensitive to the problems of the people and my admiration for him increased with each encounter. But there were other connections. He had known my grandfather, fondly remembered having played Bridge with my father in the sleepy town of Langet, his sons — I discovered — had been my junior in the Irish Catholic School of Srinagar, Burn Hall, and his daughter, a brilliant lawyer, had been taught by my mother at the local college.

There is nothing unique about this network of connections. At one stage, most Kashmiri Pandit and Muslim families could have spoken about a similar web of togetherness. The tragedy of Kashmir, of course, is that these relationships are fast disappearing.

The last time I met Lone Sahib was at a tea in Delhi, a couple of months ago, hosted by Malini Parthasarathy, the Executive Editor of this paper, for a small group that also included Mirwaiz Umar Farooq. What I remember most of that meeting was the deep faith that Lone Sahib seemed to have in the Prime Minister, Atal Behari Vajpayee, and his belief that left to himself, ``Vajpayee would have solved the Kashmir problem''.

Lone may be dead, but the potency of his message cannot die. It is time for all those in Kashmir who believe that only through non-violence, dialogue and a process of reconciliation can the problems of Kashmir be resolved — the essence of Lone Sahib's ideas — to stand up and be counted.

The challenge for all Kashmiris really is to translate the political legacy of Lone into a mass movement for peace. That would be a real tribute to Lone Sahib and everything that he represented.

Posted by Amitabh Mattoo at 9:14 AM