A museum and a mystic revive Sopore 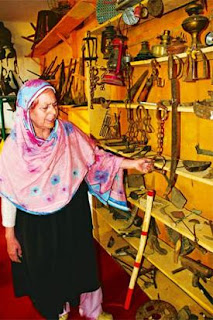 Once described as the “chhota” (little) London for its prosperity, Sopore — encased by apple orchards — was virtually destroyed during the last two decades. Today, this town is regaining its spirit and one of the most remarkable features is the Meraas Mahal Museum, which captures Kashmir’s heritage and tradition.
The museum is the story of the indomitable audacity of one person. The first woman Director of Libraries in Kashmir, Atiqa Bano, established it over a decade ago, but it is only in the last of couple of years that it has become well-known. The museum describes itself as the “Centre for Preservation of Our Glorious Heritage”, and has an impressive collection of ornaments, papier mache, dresses, coins, manuscripts and paintings and traditional utensils.
As we sit with Atiqa ji in the nearby College of Education that she runs, her steely spirit is evident as she recounts the challenges she faced during the years of violent conflict, even as she serves us ‘sheekh kebabs’ and ‘noon chai’ (salted Kashmiri tea).
The traditional dresses are breathtaking. Both Pandit and Muslim Pherans, along with the accessories, are well preserved. What is evident is, however, that one woman’s extraordinary effort requires support and help, including perhaps the services of a professional curator.
She credits her “success” to the blessings of Ahad Sahib, the mystical saint of Sopore who passed away in 2010. While alive, there was no contemporary Sufi saint in Kashmir who invited such a large following across religions, and whose powerful gaze was often compared by his Hindu followers to the luminosity of Ramana Maharishi’s eyes. Today, Ahad Sahib’s former home includes a shrine where hundreds of devotees are seen every day.


Sopore is believed to have been named after Suyya, Kashmir’s cleverest engineer, who devised a novel way of dredging to prevent floods in the valley. Today, with the blessings of Ahad Sahib and the courage of persons like Atiqa Bano, Sopore may once again show the way.