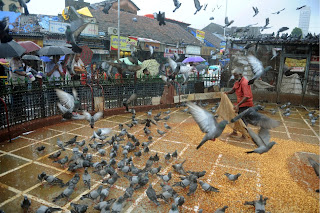 THE terror attacks in Mumbai on Wednesday are likely to end the recent thaw in India-Pakistan relations and Indian Prime Minister Manmohan Singh's hopes of a grand reconciliation in South Asia.

As yet no organisation has claimed responsibility but if elements within Pakistan's fractured establishment are linked to the attacks, it will suggest Islamabad, and particularly the army, is keen to prove it is not just an outpost for Washington in the region. Pakistan's demonstration of its autonomy, and the army's attempts at recovering its prestige through such dangerous tactical ploys, is also fraught with consequences for Afghanistan and the possibility of an early closure to the endgame being played in that country.

The attacks in Mumbai are the worst on Indian soil since the 2008 attacks on the same city that brought the financial capital of the country to a standstill for several days.

There is good evidence the 2008 attacks were carried out by members of the Lashkar-e-Toiba, a Pakistan-based terrorist organisation with strong links to Pakistan's main intelligence organisation, the Inter-Services Intelligence Directorate.

Even after 2008 the LET has continued to threaten India and it has deep links with the Indian mujahideen, who have carried out crude attacks in several parts of India.

The timing of the present attacks suggests Pakistan's military establishment is reasserting itself within the country and in terms of its most critical external relationships. Better relations with India have rarely been on the agenda of Pakistan's military, which owes its raison d'etre to hostility with India.

Indeed, the army and the ISI have grown into being an empire within a state precisely because of the enmity with India and are, therefore, deeply suspicious of a detente with India.

For nearly three years since the 2008 terrorist attacks, relations between the two hostile neighbours have remained fragile and have eased only because of the unprecedented diplomatic generosity of Singh, despite little domestic support.

India has been faced with a catch-22 situation. Almost all terrorist attacks in India, over the past two decades, have been supported or sponsored by Pakistan, and often -- there is good evidence to suggest -- by elements from within the establishment in Pakistan. And yet only by engaging and strengthening critical stakeholders in Pakistan, who are fighting the battle against extremism internally, will it become possible to reconstruct a moderate Pakistan that is a force for stability in the region.

Given that the foreign ministers of India and Pakistan were expected to meet in New Delhi towards the end of this month, and there was the possibility of a summit towards the end of the year, it was obviously critical for the terrorists and their supporters to strike now to ensure a deeply weakened Indian Prime Minister is unlikely to invest any further political capital in the relationship.

Moreover, Pakistan's military establishment has found its internal legitimacy floundering after the American attack on Abbottabad in which Osama bin Laden was killed.

The army has faced flak from civil society, from parliamentarians, and the generals have faced growing dissent from within the ranks of the armed forces in a country where anti-Americanism is widespread. Indeed almost every survey of public opinion suggests Barack Obama has less support than bin Laden in most parts of Pakistan.

In addition, Washington has recently suspended $800 million of military assistance to Pakistan. Clearly, Pakistan's army leadership is fighting a grave battle for its legitimacy and continued survival.

In a larger geo-political sense, the terrorist attacks in Mumbai follow the killing of Ahmed Wali Karzai, the powerful leader of Kandahar province in Afghanistan, and half-brother of President Hamid Karzai. It is widely believed the killing was carried out to ensure the chances of reconciliation in Afghanistan are further thwarted.

It is clear Pakistan's army has been subverting efforts at building a more inclusive governance structure in Afghanistan and also ensuring that any dialogue with the Taliban is channelled through the military headquarters in Rawalpindi.

In other words, there is evidence of a new deeply disturbing pattern that suggests Pakistan's army and ISI have embarked on an adventurous, dangerous course to regain their legitimacy domestically and their autonomy vis a vis Washington.

The attacks in Mumbai and Wali Karzai's assassination may the first signposts of what could be the beginning of a new great game in South Asia.