Prof. Mattoo to be IAIS President 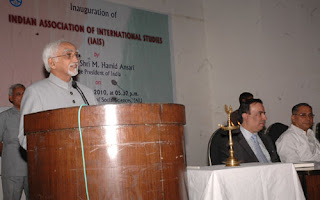 Professor Amitabh Mattoo will be the first President of the Indian Association of International Studies (IAIS). He was appointed President at the inaugural function at New Delhi of IAIS which was presided over by the Vice President of India, M. Hamid Ansari. The organization is the Indian Counterpart of the International Studies Association, headquartered at , , and will represent at the next global meeting at in later this year. Speaking on the occasion, Ansari complimented Mattoo as a visionary thinker and a great institution builder, and he believed that improving the study of research of international relations in was the need of the hour and there was no better person than Prof Mattoo to lead the organization at this juncture.

His new book "Shaping India's Foreign Policy:People, Politics and Places" (co-edited with Happymon Jacob) was also released on the occasion.