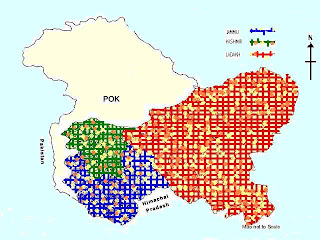 A VISIT to Jammu and Kashmir is a reminder that one of the most vital parts of the Union of India continues to wait for an imaginative political initiative, which can ensure that the upcoming elections to the Legislative Assembly are credible and inclusive, in letter and in spirit. In the last month, however, a dangerous new tendency, backed by powerful forces, has begun demanding that Jammu, Kashmir and Ladakh be divided into separate political units.

On June 22, at Haridwar, the Kendriya Margdarshak Mandal of the Vishwa Hindu Parishad called for a division of the State, including the creation of a separate Union Territory for Kashmiri Pandits carved out from within the Valley. Similarly, on June 30, at Kurukshetra, the Akhil Bharatiya Karyakari Mandal of the Rashtriya Swayamsevak Sangh sought separate Statehood for Jammu and Union Territory status for Ladakh. In addition, the Jammu Mukti Morcha and the Ladakh Buddhist Association are leading the local campaign for this demand.

Posing as a prudent solution, this demand, if conceded, could lead to — apart from political chaos — violent social disruption in the State and create a communal polarisation that would not just irretrievably destroy the cultural and social fabric of the State, but have dangerous consequences for communal relations in the rest of India. In addition, trifurcation would forever end the possibilities of reviving the plural traditions of communal harmony in the State that had once made it a symbol of the very idea of India.

The demand for a division of the State, per se, is not new. The United Nations mediator, Sir Owen Dixon, had recommended a partition of the State in 1950, and elements within the Praja Parishad agitation of the early 1950s had also sought that Ladakh and Jammu be detached from the Valley if full integration of the State was not achieved quickly. But, in its new avatar, several factors have coalesced to produce a potentially explosive situation.

Most important is the widespread feeling within Jammu and Leh of deprivation as well as political and economic discrimination by politicians from Kashmir. While this feeling of deprivation may have some grounds, it is being exploited, as is clear, by sectarian political groups who are demanding separate Statehood for Jammu and Union Territory status for Leh. They argue that not only will separation from Kashmir ensure better governance, more economic opportunities and a greater share of political power, but Jammu and Leh will also be able to distance themselves from the militancy. In its most extreme form, ideologues of this demand suggest that it is in the national interest to limit the "area of operations" of the security forces, and that division will ensure that only one-sixth of the whole State will then remain troubled.

This logic is dangerous for at least four reasons. First, trifurcation will destroy the composite identity of the State, which has existed as one unit since 1846, and send a dangerous message to the whole nation. If Hindus, Muslims and Buddhists cannot live together in one State, can they do so in a larger entity?

Second, it will most probably lead to a transfer of Muslims from various parts of Jammu, including parts of the city, but also from Doda, Rajouri and Poonch, assuming that the whole province is made into a separate State. Third, it will lead to such deep communal polarisation that bloody communal riots will inevitably follow. It is no coincidence that the only force in the Kashmir Valley that has traditionally supported the idea of a division of the State are sections of the Jamat-e-Islami. Finally, any plan to carve out a separate enclave for Kashmiri Pandits will not just create a dangerous precedent, but ghettoise one of India's most cosmopolitan and dynamic communities.

Two other factors, it needs to be conceded, have fuelled these regional tensions. First is the Regional Autonomy Committee (RAC) report released by the State Government in April 1999. Vastly different in scope and imagination from the State Autonomy Committee (SAC) Report, the RAC recommends the reconstitution of Jammu and Kashmir's existing provinces into eight new ones. The most controversial part of the recommendations is the manner in which Jammu province is sought to broken up along communal lines. All majority Muslim areas are sought to be detached from Jammu ostensibly because they share a different ethno-linguistic character. Although no action has been taken on the report as yet, it created an impression within Jammu that the State Government is seeking to increase its political marginalisation even further. Indeed, given its controversial nature, an expert committee had been appointed by the State Government to study the RAC's findings, but the committee was wound up even before it had completed its task.

Second is the controversial Kashmir Study Group Report, `Kashmir: A Way Forward', released in February 2000. Members of the Study Group include a number of prominent academics and former diplomats from the United States and Europe and three prominent American Congressmen. Painstaking in its details, and imaginative in many of its ideas, the report suggests, as one of its plans, the creation of a hypothetical Kashmiri State, sovereign but without an international personality, which includes the Kashmir valley, but also Doda and potentially also Gool Gulab Garh tahsil of Udhampur as well as Poonch and Rajouri (all within Jammu) and even Kargil. While the report argues that areas outside the Valley have been included because these areas are imbued with the cultural traditions of Kashmir, is it a mere coincidence that all parts included are Muslim majority areas? While the report itself has not been widely circulated, many of its recommendations are being widely discussed in the State.

Regional harmony, it should be clear from experience, cannot be ensured through partitions, but through a decentralisation and devolution of financial and economic power that will treat the panchayat as the primary unit of governance. Jammu and Kashmir is not Assam or Uttar Pradesh where the carving of smaller States will provide for better governance, it is in fact a recipe for disaster.

Moreover, what is needed is the return and rehabilitation of the Kashmiri Pandit minority community to the Valley, to revitalise the traditions of pluralism and communal harmony there, not their segregation into separate enclaves or their continuation in migrant camps.

In other words, there is as much need for a devolution of powers from New Delhi to Srinagar as there is for a transfer of authority from Kashmir to Jammu and Ladakh, and beyond to the grassroots level. Only then can empowerment and autonomy have any real meaning.

Posted by Amitabh Mattoo at 9:24 AM