Salvaging the peace process in Kashmir 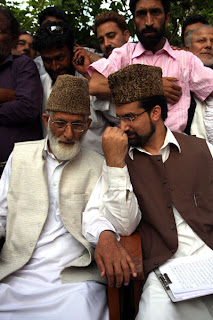 IN THE Kashmir of today, every deadline is like a Damocles sword ready to snap the only link with hope and survival. And the next deadline is February 26, the day on which New Delhi's latest extension of the unilateral ceasefire will come to an end. It is clear to even the most casual observer that unless there is a dramatic shift in established postures, and a discernable change in the ground situation, the end of February may mark the demise of one of the bravest attempts to generate a peace process in Jammu and Kashmir.

Over two months ago, the Prime Minister's announcement of a unilateral cessation of combat operations against militants in the State had brought hope and expectation. But today, in the Kashmir Valley particularly, a sense of relief at the extension is being smothered by the recognition that sustainable peace in the State may remain elusive in the foreseeable future.

Fundamentally, it is in the inability to generate a meaningful dialogue between New Delhi and separatist opinion, as represented by the All-Party Hurriyat Conference, that the peace process is floundering, even while Pakistan-sponsored militant outfits continue to spread terror, and especially target pro-Indian constituents within the Kashmiris, in cold contempt of the unilateral ceasefire. Unless, therefore, the peace initiative begins to reveal visible dividends quickly, even the Prime Minister, Mr. Atal Behari Vajpayee, will be constrained to call off New Delhi's boldest gesture, in recent years, towards the Kashmiri people.

But has the ceasefire initiative led to any tangible gains? Who, in any case, is to blame for the lack of obvious progress? And can the incipient peace process be prevented from being derailed? Perhaps the biggest achievement of the Ramzan initiative is the widespread acceptance within the State that ceasefire was not a tactical manoeuvre by the Central Government to secure short-term advantage, but rooted in a genuine desire, on part of Mr. Vajpayee at the very least, to bring durable peace to the State. Not surprisingly, the Prime Minister's Musings from Kumarakom have struck the right chord. Indeed, one separatist leader recently went as far as to suggest that no Prime Minister including Nehru had been so bold and forthright in his resolve to settle the problems of Kashmir. And he echoed Mr. Vajpayee's words: ``In our search for a lasting solution to the Kashmir problem, both in its external and internal dimensions, we shall not traverse solely on the beaten track of the past''.

There is also no doubt that the Ramzan initiative has been able to tap, in a substantial measure, the overwhelming sentiment against violence prevailing in the State. There is sufficient evidence today, for instance, to indicate that on at least two related fronts there has been significant progress. First, there is widespread relief in Kashmir at the end of the cordon and search operations that were conducted by the security forces and which unfortunately often led to harassment of ordinary innocent civilians. This relief is slowly but surely translating into a larger peace constituency, and is gradually eroding the powerful anti-Indian sentiment prevalent particularly in the Kashmir Valley.

In recent years, the single biggest source of estrangement of the local population from New Delhi was harassment by security forces, and an end to this routine humiliation has taken away the biggest grouse of the ordinary Kashmiri. What is particularly reassuring is that the Central security forces have, despite tremendous provocations, adhered by and large scrupulously to the ceasefire. The same, however, cannot be said for the local security outfits, particularly the State task force, which - on occasion - seem to have deliberately disregarded the new terms of engagement. However, the Kashmiris are sensitive enough to make a distinction between the Centre's initiative and local forces that may be seeking to disrupt the slow march towards peace.

Second, the ceasefire has also made it possible to clearly identify and isolate those outfits that are continuing to perpetrate violence. And the verdict is clear: barring a few incidents, the two organisations that have demonstrated no sensitivity towards the powerful sentiment for peace are the Lashkar-e-Taiba and the Jaish-e-Mohammad. Both organisations are led, manned, financed, trained and controlled by forces in Pakistan and have less than a tenuous link with elements that lie at the very heart of the Pakistani establishment.

Given their suffering over the last decade and their continuing sense of fear and insecurity, it is premature to expect Kashmiris to publicly and openly distance themselves from these organisations. But there are signs that both these outfits are finding it increasingly difficult to obtain logistic and other forms of support from the local population. Indeed, the more these organisations persist with their mission of terror, the greater will be the alienation of Kashmiris from them, and it will eventually open up the possibility of active resistance from Kashmir's still-latent civil society. More important, despite the Lashkar's recent espousal of civic problems in Kashmir, the ideological distance between Kashmiri cultural norms and the Lashkar's obscurantist extremism is so huge that there is virtually no possibility that this Manichean divide can be overcome.

But the ceasfire can, at best, be only a means towards generating a meaningful engagement, in which the main actors have a stake. This has, despite persistent efforts, not happened. It would have been naive to expect Pakistan to cooperate with New Delhi's peace offensive. Nonetheless, the manner in which militant outfits and other agencies in Pakistan have sought to manipulate the composition of the APHC delegation to the country, shown not even the slightest willingness to clamp down on the militants, and escalated the violence against civilians in the Valley, leaves no doubt that Pakistan is deeply insecure about any peace process involving New Delhi and the Kashmiris.

What, however, is tragic is how the APHC is, because of pressure from Pakistan and Pakistan-based militant outfits, not responding in any meaningful manner to the Centre's open offer to enter into an unconditional dialogue, bound not by the limits of the Constitution but, in the Prime Minister's words, within the framework of Insaniyat. Nor have they come out against the continued violence by the Lashkar and the Jaish. A visit to Pakistan to convince militants of the need to reciprocate the ceasefire, or to provide Pakistan with a face saver (which on present evidence it does not seem to interested in), can only be a sideshow.

The real theatre has to be enacted here, in Kashmir and within India, by entering into negotiations with New Delhi. On the contrary, statements by individual leaders seem to suggest that they are not interested in a peaceful resolution of the problems of Kashmir. Most important, if the APHC leaders were sensitive to Kashmiri opinion, they would clarify their

stand on at least three issues: Do they view the continued violence by a few militant outfits as serving political ends of the Kashmiris? Are they free agents of the Kashmiri people, or are they being pressured by forces outside Kashmir? And, finally, do they believe that that Kashmir is a political problem, which can be resolved through a dialogue, or do they consider the troubles in the State to be part of a religious war to be settled through `jehad'? It is important for the APHC leaders to remember that if they want to prevent their political marginalisation, they must not just be more sensitive to the cause of peace through dialogue, but be seen as being pro-active in initiating a process. If this chance for peace is lost, a large share of the blame will fall on the shoulders of this umbrella alliance, and Kashmiri sentiment for one will not easily forgive.

The challenge before New Delhi will become even more acute in the weeks to come. The need is to devise policies that recognise the gains made by the ceasefire, and to advance them, even while preparing to fight the consolidation in militant ranks that has taken place over the last two months. Most important, however, is to put in place policies that are addressed at the Kashmiri people, rather than at specific individuals and groups. In the absence of a dialogue, a unilateral package of economic and political incentives would be the right way to continue the peace process even if the ceasefire has to be terminated.

Posted by Amitabh Mattoo at 9:42 AM